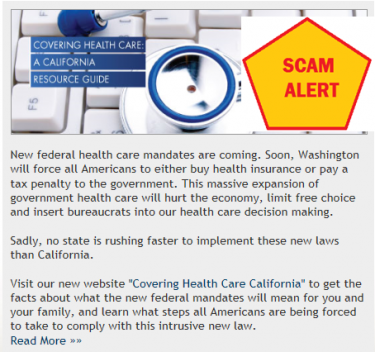 "It's outrageous that our elected officials in California are using taxpayer dollars to intentionally mislead their constituents and divert them from CoveredCA.com ... Republicans in California should be ashamed… the GOP’s newest tactics is to lie to voters and prevent sick people from getting the care they need.”—Dr. Paul Song, oncologist and Courage Campaign executive director

Covered California is the website for consumers to get information on new healthcare exchanges and sign up for healthcare coverage under the federal Affordable Care Act, or Obamacare.

Republican members including Jones are promoting the sham healthcare site, labeled a “California Resource Guide” directly to constituents on their official Assembly websites paid for by taxpayers.

A Los Angeles Times economics writer called the action an “underhanded anti-Obamacare stunt by the Califonia GOP.”  The LA Times  writer further dvised that “constituents needing useful information about how to deal with the Affordable Care Act would be well advised to look elsewhere. As an aid to understanding and navigating the Affordable Care Act's new requirements and opportunities for coverage, the GOP site is worse than useless.”

For example, the Republican site mentions only “bronze” plan options, but fails to mention three other levels that include higher levels of care options: silver, gold and platinum.

The GOP site focuses on costs and penalties, not benefits.  It suggests seniors will be forced to pay higher taxes for closure of the donut hole and that young adults will pay higher premiums to cover older and sicker individuals.

Initially, the Republican site did not even include a link to the real Covered California website despite helpful sounding links such as “helping you navigate your federal healthcare changes.”  Links went to articles slamming the healthcare reforms.  View screenshot of original site.

A link was added today, only after East County Magazine and the Los Angeles Times made inquires.  ECM contacted California Attorney General Kamala Harris, whose office has previously forced other scam healthcare sites to be taken down.

A Harris’ aide said her office declined to comment at this time on the site, which was launched in August but only recently promoted heavily by Republican members.

ECM contacted Assemblymember Brian Jones’ office. His staffer, Laurie Paredes, said Jones’ office had been receiving questions on the healthcare reforms and that the site was a way to answer all questions in one place.  Paredes  said the website is meant to educate consumers and provides “another format to answer questions from constituents.”

The website itself clearly identifies the California Republican Assembly Caucus at the bottom. An ECM search of the WHOIS database further found that the website domain was registered by Sabrina Lockhart, Communications Director for Assembly Republican leader Connie Conway  and the site is administered at the State Capitol, per WHOIS.  https://twitter.com/SDLockhart . Lockhart’s official state webpage features a screenshot of the phony healthcare site.  http://arc.asm.ca.gov/member/AD26/Default.aspx 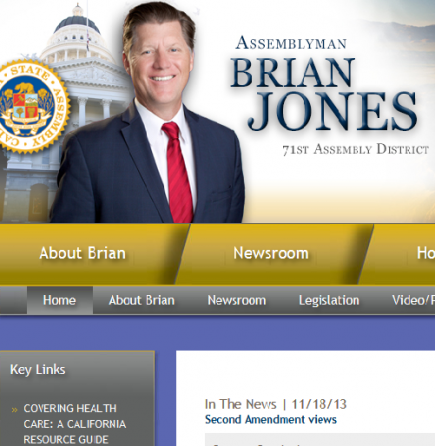 Interestingly, another Republican member, Shannon Grove, removed a similar display and link off her state website after ECM placed calls to the Attorney General regarding the use of state resources for promoting the deceptive site.  However ECM has a screenshot of the page.

Jones’ office, as of this afternoon, still includes a link to the site with the words “Covering health care: A California Resource Guide.”

While an honest critique of the pros and cons of the healthcare reforms would be a legitimate role of any elected official, the deceptive nature of the site is the core of the controversy.

The site has drawn attention at the national level with coverage on MSNBC TV and other major news outlets.

Courage Campaign and MoveOn have launched a petition drive asking Republicans to take the website down.

“There’s a good online destination, and it’s coveredca.com. By most measures, Covered California is the best site in the nation for connecting people with affordable health coverage. So, whatever other sites are out there, the place to go for information or coverage is coveredca.com.”

Majority Leader Toni Atkins (D-San Diego) had this response. "“The Affordable Care Act has been the subject of much discussion since the October 1 implementation date; however, for Californians, CoveredCA.com is the only reliable official source of information about healthcare reform.  I urge consumers to be cautious about relying on any other information.  In the long run, the Affordable Care Act and Covered California will improve the lives of the more than five million uninsured Californians who will no longer face the fear of illness and injury without insurance and who won’t be financially devastated by healthcare costs.”

In case you are wondering what the real Covered California website looks like, to avoid confusion with imposter sites, below is a screenshot image.

It appears to me that the Republican assemblymembers are committing massive deception, by offering a web site designed to confuse instead of helping people find their way through maze of healthcare options!!!  By using taxpayer dollars to deceive they are derelict in their duty at best, and acting in an unconstitutional way at worst!  California Attorney General Kamala Harris should require the Republican assemblymembers to remove this site from the internet at once!!!!

"I reject your reality and substitute my own"

Originally when you clicked links it did NOT take you to the real site to sign up for healthcare.

We have previously published stories on problems with the healthcare proposal whcih is far from perfect (I'm one of those people losing insurance and having to buy it at a slightly higher cost, so agree with you that the plan has gaps and flaws).  The truth is it helps many people who couldn't get coverage before and others get better or more affordable coverage, but there are many others who don't qualify and still others are having to pay higher rates because of insurance cancellations and I agree, this aspect was misrespresented by the Obama administration.

I have no problem with anyone pointing out flaws in the president's plan, even with one-sided coverage or criticism, as long as they clearly identify that it is an opinion or a political site, not an official government resource site.   The problem comes in with it masquerading as an official site that could confuse someone who actually wants to sign up for healthcare.

There's nothing conservative about outright deception -- any consumer affairs journalist would see this as a fraud.

Whine - Whine - Whine. so the Republications put up an information site on healthcare. What's the big deal? Yet, no complaints about the Sorros Move on . Org propaganda site?