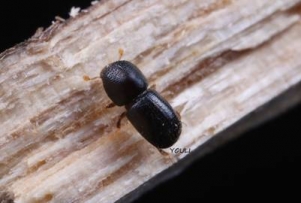 May 29, 2018 (Sacramento) -- The California State Assembly today unanimously passed a bill authored by Assemblywoman Lorena Gonzalez Fletcher (D-San Diego)  to help prevent future deadly wildfires caused when trees dry up into kindling after being killed by beetles that have become a scourge of the Southern California countryside.

Assembly Bill 2054 would create an action plan to mitigate the damages caused by the destructive beetle known as the Polyphagous Shot Hole Borer. This beetle bores into a tree and brings with it a fungus that can cause the tree to wither, die and contribute to the dry, hazardous conditions that become ripe for disaster during wildfire season.

Because of the recent drought, many trees aren’t in optimal health and thus are particularly vulnerable to this fungus. The Shot Hole Borer beetle is most prevalently found in Southern California and cite by experts as being a culprit for the death of trees in the region. Statewide, there are believed to be 129 million dead trees, according to the U.S. Forest Service, in a December 2017 news release that attributes the deaths primarily to bark beetles and drought.

“We must take care of our trees so our trees can continue to take care of us,” Assemblywoman Gonzalez Fletcher said. “These beetles are more than a nuisance. They’re a direct threat to millions of trees all over our state, whether it’s in the avocado groves of North County or an urban park in San Diego. The more dead trees, the worse our air quality and the greater the wildfire danger.”

AB 2054 would establish a framework for a coordinated statewide effort. It would instruct the Invasive Species Council of California and the California Invasive Species Advisory Committee to coordinate with state and local agencies and stakeholder groups to develop a plan to cure or suppress the disease spread by this beetle.

Once this plan is created, the state would support local efforts with actions such as providing matching grants for local agencies involved in suppressing the beetle, restoring trees that are destroyed because of it, and conducting research related to identification of infected trees and prevention methods.