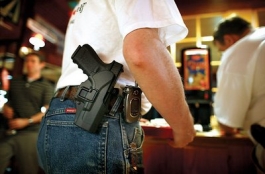 Saldaña posted a video on her website showing that an unloaded gun can be loaded in just two seconds. “The support we’ve gained from the public, law-enforcement, the Legislature and local government demonstrates that this is a real concern for people,” Saldaña said. “They recognize this as a common sense measure that balances public safety and gun rights.”

The bill was introduced in response to the recent “open carry” movement which has encouraging gun-toting advocates to strap on holstered weapons and display them in public places. Open carry advocates claim the right is protected by the Constitution.

In Pacific Beach last year, around 60 armed open-carry demonstrators frightened tourists. Some Starbucks customers also lodged complaints when open carry advocates brought guns into coffee shops. In East County, the thought of people openly wielding guns at our near schools has sparked fears in a community that has already suffered two mass school shootings at Santana and Granite Hills.

When confronted with an armed person, law enforcement is currently restricted to confirming whether a firearm is loaded, Saldaña said. Officers cannot run a serial number to see if a gun is stolen or if the person carrying the gun is a felon restricted from carrying a weapon. “Law enforcement can’t tell the good guys from the bad guys with these kinds of restrictions,” Saldaña said. “Even if their instincts tell them something’s wrong, they have to return the gun.”

Open carry," unnecessarily subjects our officers and the public to tense encounters that have unforeseeable consequence,” an editorial by Emeryville police chief Ken James in the San Francisco Gate stated. “The police officer who approaches an "open carry" subject must rapidly assess the subject's behavior without knowing if the individual has a permit to carry a gun or a gun license. The officer knows only that he or she must detain the subject only long enough to determine whether the gun is unloaded.” James concluded, “An officer has more authority to check on whether a driver is legally driving a car than to stop an individual to verify if the individual has the right to carry a gun.”

The Brady Center has issued a statement indicating that "on May 9, an open carry advocate shot two men, one fatally, on a Milwaukee street." Then on May 15, it says, "a concealed carry permit holder pointed his gun and threatened a fellow parent at a kids soccer game." And on May 20, the group says, an Ohio man and his son shot into traffic with AK-47 assault rifles, killing two police officers, before being killed themselves in a shootout with authorities.

"These incidents show the costs, in death, injury, and fear, of allowing loaded guns in public places," the Brady statement quotes the center's president, Paul Helmke, as saying. The rhetorical difference between unloaded and loaded, when the gun is being carried in public, is negligible, the center notes, since an unloaded firearm can be made ready to go in seconds by anyone with a clip handy.

But www.OpenCarry.org, an advocacy group, argues that open carry should be allowed for self protection, as a visible deterrent to crime, and as civil protest of firearms laws that the group argues are unconstitutional. Open Carry further argues that the practice constitutes “firearms community diplomacy, to dispel the myth that only cops and criminals carry guns…”

Saldana’s bill would make openly carrying a handgun, loaded or unloaded, a misdemeanor punishable by up to six months in jail and a $1,000 fine. The bill contains exceptios, such as display of a firearm by a peace officer, authorized military organization, firearm dealer, or licensed hunter while engaged in the sport.

The measure passed on a straight party line vote, with all Republicans voting against the measure and Democrats in support. Locally, Democrats Mary Salas, Marty Block and Saldaña voted in favor, while Republicans Joel Anderson, Nathan Fletcher, Martin Garrick, Diane Harkey, and Kevin Jeffries voted against the bill.

The Los Angeles Times, in an editorial, applauded passage of the bill and urged the Governor to sign if it the bill wins approval from the Senate. “Gun enthusiasts can find a more socially acceptable way to assert their manhood. We recommend growing a mustache, or getting a biceps tattoo that does the hula when flexed,” the Times opined.

The National Rifle Association (NRA) and other advocates of open carry will now take their battle to the State Senate, where AB 1984 will be considered next.

Do you know what "brandishing" means? Sorry, stupid question. No, you don't. www.dictionay.com is your friend. Use it.

This is the only actual adverse consequence of people openly carrying given in the article, and this can be solved by buying them diapers. I for one am willing to contribute to a Diapers for Tourists fund.

Webster's 9th edition defines brandishing as displaying a weapon in an ostentatious or aggressive manner. Since the tourists felt frightened that is a reasonable description.

Why do open carry advocates feel the need to intimidate others?  A right does not necessarily mean something is appropriate, wise or necessary to engage in everywhere.  Strapping on a gun in front of a school could alarm parents, teachers or students, for instance.  Rights also have limits.  Our free speech right is limited in that you can't yell "Fire!" in a crowded theater if there is no emergency.  Calling people names is not illegal but is offensive, so most people choose not to engage in such actions. I suspect if people push open carry "rights" beyond the bounds of common sense and consideration for others, they may find courts or legislatures imposing restrictions.

So this proves that you have no clue what you are talking about. You should read the law on open carry or on anything you decide to open your mouth about. A person that is open carrying can not be within 1000 feet of any school. You trying to justify the tourist being frightened is also another idiotic thing coming out of your mouth. Seeing that it says "brandishing as displaying a weapon in an ostentatious or aggressive manner". Standing there is neither ostentatious or aggressive. The way you use it makes it sound like being a big black man would make you ostentatious and aggressive just because your physically intimidating. You my friend are what is wrong with this country. Voting based on popularity vs. using your brain. Next time maybe you should not be to lazy and read!

Sign the petition for California at http://www.petitiononline.com/CalOC/petition.html - AB 1934 must be stopped.

In 2008 the Supreme Court said that the Second Amendment secures "the individual right to possess and carry weapons in case of confrontation." What part of right-to-carry does Assemblywoman Saldana not understand?