Protest planned outside over donation controversy 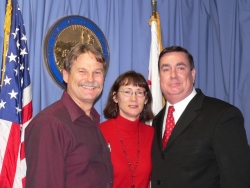 December 8, 2009 – Assemblyman Joel Anderson (R-El Cajon) invites constituents to his annual open house from 6 to 8 p.m. tonight at his offices at 500 Fesler Street, Suite 201, in El Cajon. Guests will be offered hors d’hoeuvres and refreshments as well as an opportunity to meet their legislator and have a photo taken with him. In the past, the event has drawn hundreds of visitors.

Earlier this month, Anderson agreed to a settlement with the state Fair Political Practices Commission and was fined $20,000 for accepting donations through his campaign that were in excess of amounts allowed by law. His campaign also returned more than $100,000 in donations.  Fines were for donations from the Barona Band of Mission Indians, Sycuan Band of the Kumeyaay Nation, and members of the Hamann Construction family. All gave large sums to several Republican Central Committees, which in turn funneled money into Anderson’s campaign. (SDG&E/Sempra Energy also gave large sums to Republican Central Committees which in turn sent money on to Anderson,  the Fresno Bee has reported, however the utility donations were not included in the settlement stipulation or attached exhibits.)

Anderson has not yet announced whether he will pursue plans to run for the State Senate seat currently held by Dennis Hollingsworth, as was widely speculated before the campaign finance controversy arose. Nor has he confirmed whether he will seek reelection to the Assembly.

Assemblyman Anderson’s party is free and open to all residents of the 77th Assembly District.  An RSVP is requested. Please call the Assemblyman’s office at (619)441-2322 if you plan to attend.