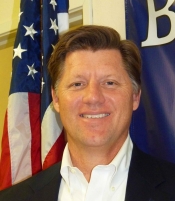 Looks Forward to Working with Leadership Team in Sacramento

“I am eager to continue working with Republican Leader Conway to get Californians back to work. The most important issues facing our state are jobs and the economy – we have to remove the regulatory and tax burdens from California’s middle class and release our creative energy and entrepreneurial spirit. California can be the Golden State again.”

The Assistant Republican Leader works with the Leader to focus and frame the debate in Sacramento, assisting in articulating the Caucus’ message and promoting policy.

Assemblyman Brian Jones represents the 77th Assembly District and is presently the Vice Chair of the Assembly Human Services Committee.  He also serves on the Assembly Legislative Ethics, Budget, Judiciary, and Water, Parks and Wildlife Committees, as well as the Select Committee on San Diego Trade, Tourism and Job Creation.  Before his election to the Assembly, he served as a Member of the Santee City Council.

“Brian Jones has distinguished himself as a true leader for Assembly Republicans, leading the fight to expose wasteful government spending by unaccountable bureaucrats,” said Assembly Republican Leader Connie Conway, of Tulare.  “In his new role, Brian will play an even more important role for our party as we work to stop the painful education trigger cuts put forward by Democrats, protect our children from dangerous classroom predators and responsibly reform our broken public employee pension system.”

I am not impressed at all w/ Brian Jones' ignoring of the smart meter issue - he is obviously "in" with industry. Even though many have called his office and even gone there to decry the harm smart meters are doing to them and their families, Jones refused to personally respond to any letters or visits, to my knowledge. Ethics? Wildlife? Parks? May God preserve us from these kinds of elected officials who feather their own nest at our expense.