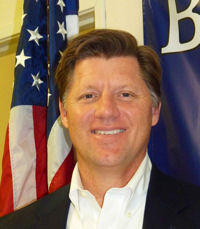 March 26 2012 (Sacramento) -- Assemblymember Brian Jones has joined his Republican colleagues in supporting a new legislative package that he says would improve services for California veterans.
“Nearly two million veterans call California home,” Jones said. “The fact that this state has not placed veteran’s services as a top priority is just another example of how misguided Sacramento has been. These men and women have sacrificed greatly for this country—it’s time we show how appreciative we truly are. That is why I am proud to support these bills.”

The bill package—introduced as thousands of veterans are returning from conflicts in the Middle East—would make it easier for veterans to transition back to their communities and obtain the resources they need.

“Despite my support, veteran’s homes lost key funding in the wake of last year’s budget cuts—a decision made without public hearing,” Jones added. “It seemed unreasonable to me that the majority party was unwilling to dedicate a small part of the budget to such an important service. I am glad part of this package would reverse that decision.”
The bill package also includes legislation that would ensure veterans have access to college courses and job training for their post-military careers, while other bills would help veterans financially by giving them breaks on certain taxes and fees.
“A vote against these bills is a vote against veterans,” Jones concluded. “I hope my colleagues across the aisle will join us in making veterans a priority.”
Below are the measures:
2012 Veterans Measures Authored by Assembly Republicans
Assembly Bill 1592 (Olsen)
Waiving Building Fees for Disabled Veterans
This bill will allow local jurisdictions the option of waiving building and inspection permit fees
for ADA-type modifications to homes owned by veterans with service-related disabilities.
Assembly Bill 1652 (Olsen)
California American Portuguese Veteran Memorial
This bill will create the California American Portuguese Veterans Memorial in the Veterans
Grove of the Capitol State Park. The memorial will be funded exclusively through private
donations.
Assembly Bill 1807 (Cook)
Protecting Custody Rights for Veterans
This bill protects the custody rights of military single parents when they return from deployment.
Assembly Bill 1832 (Silva)
Higher Education Benefits for Veterans
This bill extends the benefit period of time for priority class registration enrollment for members
or former members of the Armed Services who are attending a community college or a state
university from 4 years to 15 years. This bill would conform with the federal GI Bill, which has a
15 year term to access its benefits.
Assembly Bill 1929 (Gorell – Introduced by Cook)
Ensuring Votes of Military Personnel Overseas are Counted
This bill clarifies some definitions and terms within California’s election code so the state can
receive Federal grant funds for the purposes of implementing a system to allow overseas military
to electronically print their ballots and then cast their vote via fax or mail. The delays caused by
the current voting system disenfranchises United States citizens who are serving in the military
overseas because the current voting process often does not allow ballots to be received by
election offices in time to be counted.
Assembly Bill 1930 (Gorell – Introduced by Cook)
State Promotional Exams and Notification of Veterans
This bill will require the State Personnel Board to send information regarding promotional exams
to the Department of Veteran Affairs. By centralizing civil service job information within the
VA, they can reduce the headache of directing veterans from one department to another.
Assembly Bill 1931 (Gorell – Introduced by Cook)
One Stop Shop for Veterans Services
This bill will create a "one-stop shop" for all services available for veterans, including the
streamlining of licensure requirements, information related to owning and operating a small
business and other resources/services that are available locally and nationwide.
Assembly Bill 1932 (Gorell – Introduced by Cook)
Military Training for Health Care Licensure
This bill will require the boards and commissions of state health departments to report to the
Department of Veteran Affairs the training obtained in military service that is applicable for
licensure of health care jobs.
Assembly Bill 1936 (Knight)
Military Leave: Inactive Duty Training
There is discrepancy between California's Government Code and Military and Veterans Code
with regards to executive branch employees and inactive duty training. This bill allows an
employee under the executive branch who leaves work for inactive duty training, and is granted
short-term military leave, to receive his or her salary/compensation for the first 30 days of
service so long as specified conditions are met.
Assembly Bill 1976 (Logue)
Medical Military Veterans
This bill would fast track military veterans who served as medical professionals into civilian
careers by breaking down the barriers for them to obtain licensure in California. It would require
state entities that license health professionals to recognize the education, training and practical
experience obtained by an applicant who is a military veteran. Also, it would require college
programs that are accredited by these entities to recognize the education, training and practical
experience obtained by an applicant student who is a military veteran.
Assembly Bill 2004 (Knight)
Veteran's Personal Income Tax
This measure would exclude Combat-Related Special Compensation (CRSC) and Concurrent
Retirement and Disability Pay (CRDP) payments from gross income received by an eligible
individual.
Assembly Bill 2130 (Gorell – Introduced by Cook)
Boots to Badges
This bill would authorize the Commission on Peace Officer Standards and Training to accept the
completion of training as a military police officer in the US Armed Forces as an alternative to the
satisfactory completion of that introductory course training.
Assembly Bill 2151 (Halderman)
Funding for Fresno and Redding Veterans Homes
This bill would appropriate $26.1 million from the General Fund for the purpose of opening and
operating the state Veterans Homes in Fresno and Redding
Assemblyman Brian Jones, R-Santee, represents the 77th Assembly District, which includes the communities of Alpine, Borrego Springs, Bostonia, Casa de Oro - Mount Helix, Crest, El Cajon, Granite Hills, Harbison Canyon, Jamul, La Mesa, Lakeside, Ramona, Rancho San Diego, San Diego, San Diego Country Estates, Santee and Winter Gardens.