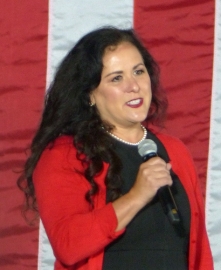 January 6, 2022 (San Diego) – Staunch labor advocate Lorena Gonzalez on Monday announced her resignation from the California state Assembly to accept a job as leader of the  California Labor Federation.  Her resignation took effect yesterday; her new position begins in July.

In a statement, the AFL-CIO group praised Gonzalez’s record:  ““Her long history with the labor movement combined with her legislative record of relentlessly championing the rights and protections of working people perfectly positions her to build on decades of success for workers led by the Federation and affiliated unions.”

Gonzalez, 50, sent a series of tweets listing her legislative achievements since she took office in 2013, including leading efforts to raise the state’s minimum wage, expanding overtime protection for farmworkers and paid sick leaves for all workers.

Some measures sparked controversy, most notably AB 5, her landmark bill that targeted the gig worker economy and sought to make many employers hire employees instead of relying on freelancers and independent contractors. While the bill was praised by labor advocates, it drew sharp criticism from many ranging from independent truckdrivers to freelance journalists,

A statement from Gonzalez indicates that despite her legislative gains, she believes  “the only way to truly change the lives of working Californians is to empower them at work. No law is ever as powerful as a union contract. So, now, I will simply continue my service by singularly focusing on strengthening the labor movement.”

Her decision was also influenced by redistricting, which put her into the same district as another Democratic incumbent, Dr. Akilah Weber.  Gonzalez has also faced health challenges in recent months, as she has battled breast cancer.

Gonzalez is married to Nathan Fletcher, Chairman of the San Diego County Board of Supervisors. Their blended family includes five children.

A special election will be held to fill the vacancy left by her resignation.  Former San Diego City Councilmembers Georgette Gomez and David Alvarez, both Democrats, have announced plans to run in Gonzalez’s 80th district.

Gonzalez promptly tweeted that she had not yet accepted the job. But DeMaio contends that’s immaterial to whether she violated state ethics laws.  After word of her acceptance of the Labor Commission post this week, DeMaio tweeted, “As CA media celebrates Lorena Gonzalez getting a cushy new job, maybe they will address the corrupt way she got the job offer?”

Gonzalez is the daughter of a Mexican immigrant farmworker and a nurse, according to her bio, she went on to graduate from Stanford University and then obtain both a master’s degree from Georgetown University and a law degree from the University of California. She chaired the powerful Assembly Appropriations Committee, in addition to being a powerhouse advocate for working people.