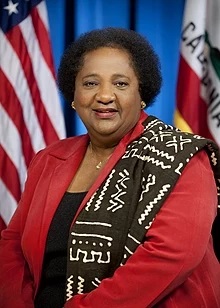 December 22, 2020 (San Diego) – East County’s Assemblywoman Shirley Weber has been appointed by Governor Gavin Newsom to serve as California’s Secretary of State, the first black woman to hold the office. The daughter of sharecroppers who were once denied the right to vote, Dr. Weber went on to earn a doctoral degree and rise to prominence as an educator and later, a powerhouse champion in the Legislature for voting rights, police reform and strengthening public schools.

Governor Newsom posted on Twitter, “Dr. Weber is a tireless advocate & change agent with unimpeachable integrity. Now, she’ll be at the helm of our elections as our next Secretary of State, the first African American to be California’s Chief Elections Officer.”  He added, “With her, CA will continue to be a model for the nation in expanding democratic participation and access to the ballot box.”

Weber, a Democrat whose district includes La Mesa, Lemon Grove, Bonita and portions of San Diego and National City, will fill the vacancy left by Alex Padilla, whom the Governor appointed to be California’s new U.S. Senator. Padilla will replace Vice President-Elect Kamala Harris in the Senate.

Dr. Weber posted on Twitter, “I am excited to be nominated for this historical appointment as the Secretary of State of California. I thank Governor Newsom for the confidence and believing that I will stand strong for California. Becoming the first African American Woman in this position will be monumental and I am up for the challenge. Being at the center of voting rights and laws that govern this state is a motivating factor in the work I will continue to do.”

Born in Arkansas and one of seven children, Weber earned a PhD in communications from the University of California, San Diego. She is professor emerita of Africana Studies at San Diego State University, a department she helped establish back in 1973.  She chaired the department and taught there for 40 years.

The Sacramento Bee reports, “Among her colleagues, Weber is considered a civil rights icon with a passion for bridging the gap between the haves and have-nots, and providing the state’s most vulnerable residents with academic and financial tools.”

She authored successful bills to ban peremptory strikes of jurors due to race or ethnicity and to make ethnic studies a requirement for graduation at California State University campuses amid civil unrest and racial injustice protests.

Her appointment must be confirmed by the state Assembly and Senate.  Per the California Constitution, legislative vacancies including Weber's seat must be filled by special election.

In choosing Weber, Governor Newsom bypassed another San Diego Assemblywoman and Democratic legislator, Lorena Gonzalez. Gonzalez had announced her intent to run for Secretary of State in 2022 and had amassed a large campaign war chest.

However Gonzalez issued a gracious statement following Weber’s appointment, which reads, ““I feel very strongly about voting rights, which is why I was running for Secretary of State.” She adds, “While I would’ve loved the opportunity to serve in that role, I fully appreciate the need to amplify Black women in our state. Shirley Weber is an icon and will serve California well as Secretary of State.”