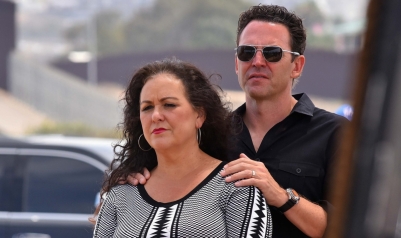 Gonzalez, a Democrat who represents the 80th Assembly District, came through Saturday’s surgery “tired, sore and groggy, but cancer free,” her husband, Nathan Fletcher, said in a Twitter post.

Fletcher chairs the San Diego County Board of Supervisors.

Earlier Saturday, Fletcher said Gonzalez – who turns 49 in the coming week – headed into her operation “in very good spirits.”
Very early Saturday, Gonzalez pronounced herself “officially out of pocket” and referred well-wishers to Fletcher’s account – “the love of my life,” she called him – for updates.
Gonzalez announced her diagnosis last month in spirited fashion, calling cancer “just another hater trying to kill my vibe. Not. Going. To. Happen.”
Fletcher provided some context about his wife’s outlook via social media, saying her cancer was at Stage 0, and she had suffered no symptoms, but it also was considered aggressive.
Gonzalez’s treatment will be aggressive as well, he wrote, because she has a family history of breast cancer. The disease killed her mother 18 years after her original diagnosis.
In the weeks since, Gonzalez has continued with Assembly business, as 11 of her bills moved on for Gov. Gavin Newsom’s signature.
While depicting her routine tasks on Twitter – bills had to be off the floor by Friday – she mixed in updates about sessions she would miss due to doctors appointments and noted the struggles of some women to pay for diagnostic mammograms.
Gonzalez, whose district covers parts of San Diego and the South Bay, was elected in 2013.