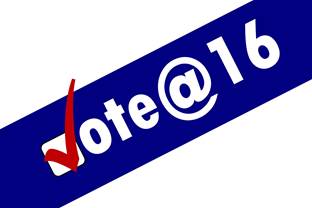 February 12, 2016 (Sacramento) - Assemblywoman Lorena Gonzalez (D-San Diego) rallied on the steps of the State Capitol today with lawmakers, educators and young adults to announce the introduction of an amendment to California’s constitution allowing 16- and 17-year-olds the right to vote in their local school board and community college district governing board elections.

“These young adults are directly impacted by decisions made by local education boards, and deserve to have a voice – especially in families where the students represent the first generation of voters,” Gonzalez said. “Studies have shown 16-year-olds have the same maturity, intelligence & cold decision making abilities of 18-year-olds. They’re ready to be heard, and their school board representatives should be ready to listen.”

Also speaking at the rally were the co-authors of the Vote @ 16 proposal, which is known as Assembly Constitutional Amendment 7: Assemblymen Tony Thurmond (D-Richmond) and Rob Bonta (D-Alameda); Sacramento Unified School District Board President Jay Hansen; several student leaders and representatives from supportive organizations, including the Children’s Defense Fund-California, Alliance for Boys and Men of Color, Fathers & Families of San Joaquin, and Black Parallel School Board.

Research suggests that not only would 16- and 17-year-olds be able to make informed political decisions, but that ACA 7 could instill strong voting habits and lead to greater civic engagement throughout their lives.  The opportunity to vote while still in high school means that not only are youth in a learning environment to discuss civics at school, but also may have the opportunity to engage in political and civic discussions at home. Research indicates this may lead to an increase in parental civic engagement and voter turnout.

“I see our 16 and 17 year old  tudents as young adults, and it benefits us all to treat them that way,” Sacramento Unified School Board President Jay Hansen said. “By extending them the right to vote, we have a golden opportunity to provide the civics education that will turn them into lifelong voters and lifelong engaged citizens.”

In 2014, the United Nations called for countries to increase their engagement efforts with young people in democratic processes; and Alaska, Arizona, New Mexico and Washington have all considered proposals to lower the voting age. Two cities in Maryland – Takoma Park and Hyattsville – have actually had success in lowering the voting age by amending their city charters, and in 2013, the turnout of newly enfranchised voters in Takoma Park was nearly double the turnout of voters over age 18.

“We are not only the leaders of tomorrow but the leaders of today,” said Luis Vivero, a high school student and part of the Young Stars program at Fathers & Families of San Joaquin. “We are the next visionaries of the world.”

While these youth are directly impacted by the decisions of school board members and those governing community college boards, they have to rely on their parents to vote for the elected officials who make those decisions. Moreover, many students, while U.S. citizens, have parents who are not able to vote in elections. This leaves these students whom society has deemed responsible enough to drive, work, and pay taxes without meaningful representation in decisions, like the formulation of Local Control and Accountability Plans (LCAPs), which impact their daily lives in school, and may mean these local decisions are neglecting a significant part of the community.