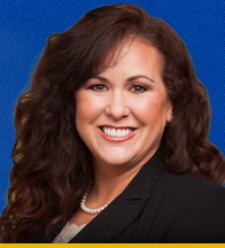 March 29, 2015 (San Diego)--  Assemblywoman Lorena Gonzalez, a San Diego Democrat, was honored Thursday night with the Cesar Chavez Foundation’s Legacy Award for her career supporting immigrants and working families. In commemoration of Cesar Chavez Day, the awards are presented to those who exemplify excellence and unparalleled commitment to community empowerment and advocacy.

Gonzalez says she is humbled by the honor but adds, “Any success I may have is meaningless if our community does not share in the fruits of that success. In a state where farm workers are provided fewer protections to water and shade than farm animals, we still have a long way to go. I am committed to continuing the work of representing every Californian, no matter where they work or their immigration status."

The daughter of an immigrant farmworker and a nurse, Gonzalez was the first woman and first person of color to be elected CEO and Secretary-Treasurer for the San Diego and Imperial Counties Labor Council, AFL-CIO since the organization's inception in 1891. She was elected to the Assembly in May 2013. In her first three months in office,  she authored two bills that empowered California's immigrant communities by providing them safeguards against immigration fraud (AB 1159) and allowing qualified DREAMers who pass the State Bar exam to practice law, regardless of their immigration status (AB 1024). Then, in 2014, Lorena authored historic legislation to allow 6.5 million Californians the ability to earn paid sick leave. When AB 1522 was signed by Governor Brown, California became the first state in the nation to guarantee earned sick days for every single private sector worker.

The mission of the Cesar Chavez Foundation is to enrich and improve the lives of farm workers and Latino families outside the work place by meeting their essential human, cultural, and community needs. The Cesar Chavez Foundation’s programs evolve in response to the needs of the population it serves. For more than 40 years of service, the Foundation has been guided by unyielding core principles: Quality, Integrity, and Sustainability. It has four core programmatic areas - high quality affordable housing, educational radio, academic tutoring and preserving and promoting the legacy work of the National Chavez Center that keeps his legacy alive through its daily efforts.

Assemblywoman Lorena Gonzalez represents California’s 80th Assembly District, which includes portions of the cities of San Diego, Chula Vista and National City. She serves as Chair of the Assembly Select Committee on Women in the Workplace and is a single mom. For more information, visit http://asmdc.org/members/a80/.

https://www.youtube.com/watch?v=lQ9jIXHhFJI
"Immigration The UFW during Chavez's tenure was committed to restricting immigration. Chavez and Dolores Huerta, cofounder and president of the UFW, fought the Bracero Program that existed from 1942 to 1964. Their opposition stemmed from their belief that the program undermined U.S. workers and exploited the migrant workers. Since the Bracero Program ensured a constant supply of cheap immigrant labor for growers, immigrants could not protest any infringement of their rights, lest they be fired and replaced. Their efforts contributed to Congress ending the Bracero Program in 1964. In 1973, the UFW was one of the first labor unions to oppose proposed employer sanctions that would have prohibited hiring undocumented immigrants. Later during the 1980s, while Chavez was still working alongside Huerta, he was key in getting the amnesty provisions into the 1986 federal immigration act. On a few occasions, concerns that undocumented migrant labor would undermine UFW strike campaigns led to a number of controversial events, which the UFW describes as anti-strikebreaking events, but which have also been interpreted as being anti-immigrant. In 1969, Chavez and members of the UFW marched through the Imperial and Coachella Valleys to the border of Mexico to protest growers' use of undocumented immigrants as strikebreakers. Joining him on the march were Reverend Ralph Abernathy and U.S. Senator Walter Mondale. In its early years, the UFW and Chavez went so far as to report undocumented immigrants who served as strikebreaking replacement workers (as well as those who refused to unionize) to the Immigration and Naturalization Service. In 1973, the United Farm Workers set up a "wet line" along the United States-Mexico border to prevent Mexican immigrants from entering the United States illegally and potentially undermining the UFW's unionization efforts. During one such event, in which Chavez was not involved, some UFW members, under the guidance of Chavez's cousin Manuel, physically attacked the strikebreakers after peaceful attempts to persuade them not to cross the border failed."