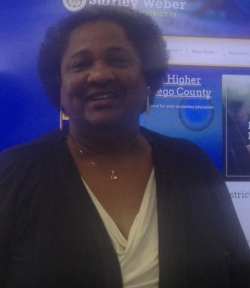 Weber, a Democrat, represents one of the most diverse districts in California. It includes La Mesa, Lemon Grove, San Diego State and the University of San Diego, Otay, National City and San Diego communities including Clairemont Mesa and Tierrasanta

Chamber General Manager Eric Lund welcomed Weber, who served 40 years as an SDSU professor/administrator and 8 years of the San Diego Unified School District for 8 years before her election to the Assembly in 2012.  There she has served on the Assembly’s education and higher education committees as well as the budget committee.

September 11th is the end of the regular legislative session. But Weber talked about changes in the process. “We’ve also done something new this year, extraordinary sessions,” she said, adding that the Governor asks the Assembly Speaker to call a special session  when needed. “This came about because during the budget process, there were important issues we couldn’t address.”  This year, there are two special sessions to address- Medi-Cal and disabled services, as well as infrastructure.  Disabled services were not addressed in the budget and needed attention, she noted.

Key issues for Weber include social justice and voting rights, as well as body cameras and racial profiling. She discussed AB 173, which she authored and which passed this year, providing an opportunity for small businesses to contract with universities. Weber also deals with veterans issues including disabled vets.

She’s also actively involved in education issues. She mentioned how utility costs have gone up $25 million more for schools, an average 39% increase. She has gotten involved with that, and has already met with 20 different schools in her district and will probably have a hearing. She’s even thinking of starting an independent utility company, where schools can decrease the cost and increase the resources.

Nichole Drake, owner of Wingstop, asked Weber, “Do you feel that increasing the minimum wage encourages employees to become stagnant and not pursue a higher education?” Weber didn’t think so. “People need to live on more than a minimum wage to live here,” she replied. “It keeps them alive, but it’s not a definition of a good life. That’s probably why so many students live with their parents… The question is providing options to those who choose not to go to higher-ed.”

She’s been trying to figure out greater opportunities for young people, such as opening their own businesses. She’s been pushing trade school and has even had a career fair of 20 trades, where people can learn and get an apprenticeship. There were 400 people at the fair at the Jacobs Center recently. She has also gotten involved with the oil industry, and has brought a representative to schools. She took interested students to a company in Long Beach in the oil industry. Weber has been working on a summer internship for students interested in the oil industry. She’s even seen people in their forties showing up. She plans to have a trade career fair at the Jacobs Center again next year.

David Johnston of the East County Realtors Association mentioned how he read in the paper about two senators revamping Prop 13, the ballot initiative that’s kept property taxes low for decades but has also limited revenues for the state. Weber wasn’t familiar with those details and didn’t think people would be interested in moving forward with Prop 13 changes but acknowledged, “At some point, we’ll have to deal with Prop 13.” Weber’s senior field rep, Lee Hernandez, mentioned that those two senators were Loni Hancock of Berkley and Holly Mitchell of Los Angeles. Their proposal would apply to larger commercial and industrial properties, but not residential or agricultural, with breaks for small businesses (See: http://www.latimes.com/local/politics/la-me-prop-13-20150610-story.html).

Susan Roberts-Egley, a Chamber member also from the East County Career Center, was glad that Weber was passionate about education. She mentioned how there are numerous programs in California besides university programs, but she’s been surprised that the state isn’t telling parents of the different options like career tech school etc. She wants to see a campaign put together to promote it, adding, “Parents need to be educated.”

Weber talked about the local control funding formula, where the Governor changed the way schools are funded. Many schools decided not to fund career-tech even though they had the money for it. “There’s been an interest in the career-tech. Career tech depends on the school board to promote it. One of the greatest challenges is getting people involved in high school. They’re not coming to open house,” she said.  Weber thinks it’s been easier to reach out to kids to get them to get see different options. But it’s been difficult for schools to release kids. She brought up how one school refused to let Weber take kids up to Long Beach because they wouldn’t be riding a school bus, even though it was a Saturday morning and wouldn’t interfere with school hours.

Jo Marie Diamond of the San Diego Economic Development Council asked if there would be anything to focus on communities with bridges and overpasses in regards to the infrastructure extraordinary session. Then, people could go to their own community center rather than traveling to one. She mentioned how the Bradley street bridge near Highway 67 needs to be constructed, so work can be done on the industrial side. She’s heard rumors that an extraordinary session will talk about developing bridges and roads, which will create jobs.

Weber told her there will be bridges, though, there’s a question about how construction would be funded. Money would most likely come from gas taxes. The Bradley street bridge has been a problem for 20-30 years, according to Diamond.

Cathy Hilton, a Chamber member, has been following public education and observing the system. She’s been disappointed at the disparity in education. She believes one of the biggest problems is communication because of California’s large size.. Hilton thought a collaborative needs to be built in the community and include elected officials. “There’s still not enough outreach in El Cajon. [But] the whole East County region is important.”

Weber mentioned how she had an evaluation bill to expand how progress is defined and also include an evaluation process for the schools. The whole purpose of education is to make progress, she observed. The intent would be that the first person who scored on the ‘needs improvement’ section would then get training. Unfortunately, the bill was killed.  She said, “The key piece in any education is the teacher. We’ve done a poor job in sustaining the teacher”, in particular with K-12.

Weber recently had a meeting with a trade school in Los Angeles that’s been struggling; 93% of kids who have come in can’t pass the basic math and English tests. “We have got to change what we’re doing to reach the kids,” she declares. Weber was raised in the projects of Los Angeles, and said she was blessed to have teachers who encouraged her. In Sacramento, she says she’s willing to provide money, but she wants some results. There are kids who can’t pass the high school exit exam. Those kids just get by, and there’s no one to help them. She knew of a high school student who participated in athletics and had a 3.3 GPA, but he couldn’t pass the exam.

Kathy Olsen of RCP Block and Brick and a Chamber member asked if anything’s been done with AB 219. Weber told her that it’s been in suspense, so it will most likely get killed. Olsen also applauded Weber for her stance on education.

Michael Emerson of Grossmont Healthcare District brought up Medi-Cal and the reimbursements. He asked if she can open up the $1.1 million reimbursement. Weber said the proposal has been in the Assembly budget, but not in Senate. Legislators may still have to go through the general fund, but mayb be able to address the issue in special session. “We’re optimistic it’ll happen,” Weber said, adding that the speaker of the Assembly went to Washington DC and urged leaders there to take action on this.

Tom Gallagher, who’s retired, asked how they can still go to the federal government even though the government has a $500 billion deficit each year. Weber told him some say Washington is broke and some say they’re slow.

Steve Lachman of the Chamber acknowledged Weber for her leadership in education. He brought up how his first-grade granddaughter started school two days ago. He wondered if the No Child Left Behind Act has gone to sleep or has been forgotten about. “Schools used to glorify baby-sitting services,” he added.

Weber replied that No Child Left Behind is still there, but “It’s changed significantly.”  Schools got $8 million this year, and are funded higher this year. Lachman then asked about accountability for the money schools get to make sure they use it wisely. Weber told him about the local control accountability plan (LCAP), which tells schools how to spend money and schools present it to the state board. She said people can visit the state’s Education website and can see where that money is going. Parents can also request a copy of LCAP from the school district.

To view LCAP in your area, go to: http://www.cde.ca.gov/fg/aa/lc/lcffoverview.asp or http://www.sandi.net/lcap.

To find out more about AssemblywomanWeber, view her website: http://asmdc.org/members/a79/.