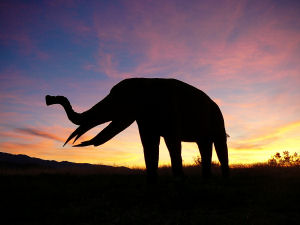 December 1, 2011 (Borrego) -- The word is out: there are now more attractions than desert wildflowers and the spectacular Anza-Borrego Desert State Park drawing visitors to Borrego Valley.
People are coming from around the United States and internationally to see the 129 full-size metal sculptures, including many creations inspired by the animals that roamed this desert millions of years ago. These range from prehistoric mammals to historical characters, fanciful dinosaurs, and a 350-foot-long fanciful serpent.

The sculptures are perfect blends of superb craftsmanship and picture-perfect placements in the open desert landscape. The sculptor has taken a primitive welding art form of Mexico to new provocative heights.

The creator of this whimsical collection, spread out on three square miles of non-contiguous desert land surrounding Borrego Springs, is Ricardo Breceda, a gifted artist who ten years ago never knew that one day he would have the talent and skill to build these remarkable sculptures. His talent grew out of a devastating accident that changed his life.

As a college graduate and a credentialed teacher in his native Durango, Mexico, he grew restless and dissatisfied with a future that would not bring him some recognition or fortune. He moved to California, seeking a new life working himself up from a busboy at El Torito Restaurant in Riverside to a restaurant manager and finally, to a high-paying construction worker. On one construction job, he suffered a fall from a two-story building that resulted in a debilitating back injury.

One of the few jobs he could handle after the accident was selling exotic boots. Because he was doing the sales on his own, he was willing to barter with customers that wanted his boots. One fateful day 10 years ago, he traded a pair of boots for a welding machine and began to “play” with it when he was not selling his boots. Probably nothing would have come from it but for a request from his seven-year-old daughter Liana who was then interested in dinosaurs.

The summer blockbuster of 2001 was Jurassic Park 3. Breceda took his young daughter to see the movie. Soon afterwards, he asked his daughter what she wanted for Christmas and she quickly responded, “A dinosaur, Daddy.” She made it clear she wanted a life-size dinosaur and she wanted her father to make it for her.

As far as Breceda was concerned, if his daughter wanted a Tyrannosaurus rex, then he would somehow make one for her. Little did he realize that the construction of a sheet metal dinosaur would turn into his current life’s work? 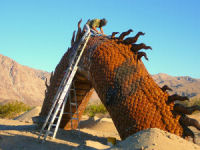 Today Breceda’s sculptures are found across the world, from Canada to Australia. The highest concentration of sculptures are found in Borrego Valley and were all commissioned by Borrego landowner Dennis Avery, who has scattered the sculptures on lands that he has held for years for conservation. The private property, call Galleta Meadows, is open to the public for viewing and short-term camping.

The first 60 sculptures were placed in Galleta Meadows between April and November 2008. All were inspired by animals that lived millions of years ago in the Anza-Borrego area during the Plio-Pleistocene age. Among the assemblages are elephant-like gomphotheres with four tusks, giant ground sloths, Galapagos-size land tortoises, mammoths, peccaries, sabertooth cats, extinct horses, and a giant bird called an Aiolornis that stood four-feet tall and had a wingspan of seventeen feet.

The sculptures are called “Sky Art” because they are art forms that appear under the expansive sky. They are artistic renditions of actual illustrations that appeared in the book Fossil Treasures of the Anza-Borrego Desert published in 2006. The book is a compendium of the seven-million years of almost unbroken fossil history of this desert area written by 23 scientists and specialists in the fossil life and paleo-environments of the region. This five-year book project received funding for the original artwork that appears in the book from Dennis Avery and others.

Avery, in turn, thought it would be magical to turn the illustrations into three-dimensional life-size sculptures. When he realized what Breceda could do with the illustrations in the book, he was more than willing to order one assemblage of animals after another.

After Avery ended the scientific possibilities from Fossil Treasures, he turned his attention to the dramatic history of the Anza-Borrego area, commissioning sculptures of Spanish explorer Juan Bautista de Anza, for whom the park is named, and other Spaniards and Indians who played a role in the opening of a road to California through the desert park. He added a gold miner and a mule and also commissioned the emblematic Peninsular bighorn sheep – the “borrego” in the park’s name.

Avery even included the field workers who harvested grapes in Borrego Valley until the nationwide boycott of grapes brought an end to the 20-year history of growing grapes in the valley. There is also the first civilian jeep based on the World War II military vehicle, the Willys CJ-3A, which is full-size with a driver and a passenger.

Then came sculptures out of pure whim and fantasy, first with a Velociraptor, and then other theropods dinosaurs including Allosaurus, Spinosaurus, Carnotaurus, Utahraptor, and Tyrannosaurus rex. There is no fossil evidence that any dinosaur ever roamed through this desert. They were placed in Galleta Meadows just for fun. 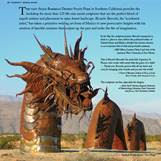 The most dramatic of all is a giant 350-foot long serpent that appears to dive under Borrego Springs Road. It has a tail of a rattlesnake and a head of a Chinese dragon. It is by far the most detailed work created by Breceda found at Galleta Meadows.

Breceda’s sculptures have in turn inspired others. The Borrego Art Institute’s annual Plein Air Invitational set aside one day for artists to paint renditions of the sculptures. Photographers have taken pictures of the sculptures under every condition – under the starry night, at sunrise and sunset, and with rainbows. Families visit the sculptures and have fun picnicking or camping beside them. A happy-hour group rotates weekly through the various assemblages. Red Bull brought world-famous Australian motorcycle stunt rider Robbie Maddison to Borrego to perform a “scorpion” while flying over the gomphotheres.

Dennis Avery also created a website where people can get more information about the sculptures at www.galletameadows.com. The site has a place for comments and reactions to the sculptures a 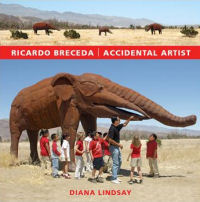 nd invites anyone to enter their own thoughts. A new book, entitled Ricardo Breceda: Accidental Artist has also beenreleased by San Diego publisher Sunbelt Publications. The 256-page book has over 280 photographs, illustrations, and maps showing the locations of all of the 27 assemblages and relates the unlikely story of the “Accidental Artist.”

For those who want to know more about Breceda’s story and the sculptures, a series of PowerPoint programs by author Diana Lindsay are scheduled.  The next presentation is at an open house holiday party at Sunbelt Publications on Thursday, December 8, from 4:30 to 8:30 p.m. at 1256 Fayette Street in El Cajon. Ricardo Breceda will attend the program at the San Diego Natural History Museum on Sunday, January 22 at 4 p.m. and will be available to answer questions about his art. Call 619-258-4911 for more information.