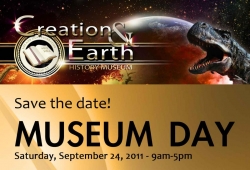 Tom Cantor, owner of Scantibodies and founder of Life and Light Foundation that runs museum, is accused by employee of providing “bad science” to public

September 12, 2011 (Santee) --San Diego New Atheists and Agnostics (SDNA), a Web-based organization of over 700 members, plans a demonstration against the Creation and Earth History Museum in Santee on September 24. That’s the same date when the Museum plans to participate in a nationwide “Museum Day” organized by the Smithsonian Institute, as ECM previously reported.

The Museum, which teaches creationism beliefs contrary to Darwin’s theory of evolution, has touted its Museum Day activities to include such attractions as dinosaur gardens, a human anatomy exhibit, creepy crawly reptile encounter, animal balloons, face painting, and guest speakers including a geologist and biologist.

Judy Glassman, a spokesperson for the Smithsonian in Washington D.C., said any museum or cultural center run by a nonprofit 501c3 foundation, as well as government-run museums, qualify to be promoted under the Museum Day program, which offers free admission to museums with tickets printed on the Smithsonian website.  "We just let anybody who fulflls that criteria participate," Glassman told ECM.

John Viggiano, a chemist at Scantibodies Laboratories, is speaking out to “keep science alive” and “defend evolution,” according to an e-mail sent to ECM today. Tom Cantor, the founder and owner of Scantibodies Laboratory, along with his wife Cheryl, formed a non-profit 501(c)(3) ministry called Life and Light Foundation, from which to run the controversial museum after buying it from its original operator, Institute for Creation Research, which ran the facility for 20 years.

Light and Life Foundation’s website reflects its religious viewpoint, stating, “With plans for future expansion of the museum and resource center, Life and Light Foundation looks forward to serving the Christian community.”

Viggiano will join members of SDNA at the September 24 protest. “The SDNA group mainly serves as a resource for non-religious locals to meet like-minded people, but has participated in similar events before, most notably the protest of creationist Ray Comfort’s, “Origin into Schools Project,” back in 2009,” a press release issued by SDNA states.

The main point of contention that SDNA members have with the Creation and Earth Science Museum is the Museum’s claim that the Earth is only 6,000 years old, an idea “derived from Anglican bishop James Ussher’s 17th century calculation, using the genealogy of the Bible, that the beginning of time was October 23, 4004 B.C (Julian calendar),” SDNA’s release notes. “

The vast majority of scientists and scientific bodies, including the National Academy of Sciences (NAS), the National Center for Science Education (NCSE) and the world-renowned Smithsonian Institution dispute this claim, saying instead that hundreds of years of cumulative evidence point to the Earth being around 4.5 billion years old. Their far older number comes mainly from radiometric dating of rocks from Earth and space objects, a method based on known decay rates for radioactive elements.

Another big problem with the museum, say SDNA members, is that it endorses a model for the creation of life, namely, special creation, which is likewise based on Biblical literalism. Special creation, the notion that each type of animal, plant, etc. was made by God through supernatural processes, has been the accepted doctrine of the Judeo-Christian tradition for millennia. The idea was scholarly expanded upon in the writings of 18th century British theologian William Paley, who told a parable of a traveler encountering a watch in a field and knowing intuitively that the time-keeping device must have had an intelligent designer.

Then came 19th century British naturalist Charles Darwin, who, instead, argued that species struggling for survival produce slightly different offspring by chance, and only the fittest survive. For instance, young giraffes with slightly longer necks could reach higher into trees for food and thus were more apt to survive to adulthood. Darwin termed this process “natural selection.”

“Flash forward to the 21st century: all of the aforementioned scientific bodies and almost all others say that the evidence for the evolution of all species from a common ancestor is stronger than ever before, which includes research from the fields of genetics, archaeology, geology, and many other scientific disciplines,” SDNA’s release states. “ In fact, the late Russian geneticist, Theodosius Dobzhansky once said, “nothing in biology makes sense except in light of evolution,” and his quote remains widely accepted among science educators to this day.”

Public opinion appears at odds with the majority of scientists. Gallup polls from 2006-2010 reveal that a steady 40 percent of Americans believe that humans were created by the Judeo-Christian-Islamic God “pretty much in their present form” at some time within the past 10,000 years. By contrast, A 2009 Pew Poll indicated that 97% of scientists believed in the evolution of living things over time.

The San Diego New Atheists was founded on November 1, 2006 through meetup.com, a social networking website. For more information about our organization, contact the lead organizer, Pedro, at http://www.meetup.com/atheists-518.