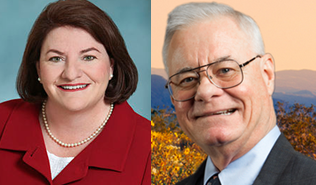 “Governor Brown made it clear that California will not turn its back on the immigrants who contribute so richly to our culture and our economy; nor will we turn away from reproductive healthcare and climate science. Our state will continue to lead the way forward on these issues.

“He also recognizes that in a democracy, there are different points of view. California, like the nation, has many unique communities, and it is our obligation to understand their perspectives and experiences. We may not always agree, but that doesn’t mean we shouldn’t strive to find common ground.

“The Governor reminded Californians that we have a lot to be proud of – a strong economy, bolstered reserves, higher minimum wage, reduced unemployment, greater investments in education – and he pointed out that new investments in public works would help us continue that forward momentum.

d he touched my heart when he ended with a Woody Guthrie lyric! Great speech. Vintage Jerry Brown.”

Voepel issued an “annotated version” of the Governor’s remarks.

Brown noted that California has reduced unemployment from 12.1 to 5.2 percent, creating nearly 2.5 million jobs. Voepel noted that while those numbers appear “strong on the surface, a number of our state’s citizens who have struggled to find work have left California for other states in the hopes of finding employment.”

On Brown’s statement that California has increased support for public schools and universities by tens of billions of dollars, Voepel responded, “Despite the increases in funding, our student’s performance still falls well behind other states. It’s clear that funding isn’t the only issue – it’s important we implement specific reforms to improve our education system.”

Regarding the Governor’s pledge to “make California a world leader in the fight against climate change,” Voepel, a climate change skeptic, says the current cap-and-trade program has been a “complex and ineffective boondoggle that may not even be legal.”

He applauded the Governor, however, for focusing on long-term fiscal health by proposing to strengthen the rainy day fund.   However, he suggested revenue predictions may be overly optimistic and too dependent on income from high earners.

He differed sharply with the Governor’s pledge to protect undocumented immigrations against deportation threats from the Trump administration.  “Many of the measures he has supported have directly conflicted with federal law and have made it more difficult for enforcement officials to execute their responsibilities.”

On healthcare, he called the Affordable Care Act an “ineffective and improper solution” that has forced some people to switch doctors and face higher premiums.  He said he agrees that it’s important to “Ensure our citizens have proper healthcare” but did not elaborate on what his alternative to the ACA he would back.

One area of potential agreement with the Governor is on an infrastructure plan to create jobs, though Voepel wants the focus on transportation upgrades and repairs without raising taxes or fees.