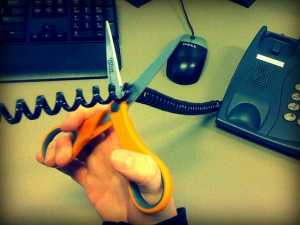 April 12, 2016 (Sacramento) – Tomorrow, April 13th at 1 p.m.,  the Assembly Committee on Utilities and Commerce will hear AB 2395, a measure that aims to eliminate hard-wired land line phones in California communities where cabled fiber optic connections are not available or are too expensive to install, such as rural, mountain and desert regions.  Customers would have no choice but to switch to wireless cell phone service, if the measure being pushed by AT&T is enacted.

In emergencies, 911 callers’ locations cannot easily be verified, unlike calls from land line which can be pinpointed instantly. In case of fire, medical emergency, or a serious crime in progress, prompt 911 responses are critical.  Moreover, during power outages, cell phones run out once batteries are dead and there is no way to recharge batteries in an outage, whereas old-fashioned land lines (though not cable phones) continue to work even when the electricity is off.

"In addition, some of us living near the U.S./Mexico border do not have cell service due to rugged terrain and agreements with Mexico not to have cell towers too close to the border,” says Donna Tisdale, chair of the Boulevard Community Planning Group.  So eliminating land lines would leave border residents in the most remote areas of  San Diego County with no phone service at all.

AT&T is initiating similar pilot projects in other states to disconnect what it terms “legacy” systems, or land lines, to save money.

California residents concerned about losing land lines are urged to immediately call the Utilities and Commerce Committee members here:  http://autl.assembly.ca.gov/membersstaff as well as your own Assembly representative. You can find your Assembly representative and their contact information here: http://www.eastcountymagazine.org/0809soundoff

VOIP is one of the proposed means to have a "landline" but I am not sure if it is available everywhere yet, especially in the rural areas. I have U-verse service through AT&T but not sure if it is still considered as a "voice grade single line service" which will be eliminated. The internet speed in our rural location is currently limited to 3 mbs using the AT&T lines. Here is a quick link for info about VOIP. https://www.fcc.gov/general/voice-over-internet-protocol-voip
The bill would authorize the commission, if it determines after investigation that no alternative service is available to that customer at the customer’s location, to attempt to identify a willing provider of voice service to serve the customer, and if no willing provider is identified, to order the withdrawing telephone corporation to provide voice service to the customer for a period no longer than 12 months after withdrawal. The bill would require the commission to establish a universal connectivity program by September 1, 2019, to ensure that those customers for whom the commission has ordered the withdrawing telephone corporation to provide voice services for the 12-month period will continue to have voice service available after that period.
As a 9-1-1 Dispatch Supervisor, there is a PR crisis in the fact that people mistakenly think that when you call 911, the dispatchers automatically know your location. This is *ONLY* true for landlines (and even then, routing errors can happen.) Cell phones are a crap shoot, and only give us a ballpark idea of where the caller is at. I keep a landline as a form of "insurance." 1) So dispatchers will have my exact location should I call 911, and 2) in case cell towers go down (ie, Southwestern Blackout 2011, Cedar Fire 2003, etc.) -- and I encourage all readers to do the same. Shame on AT&T for putting money over lives!
Augh! Thank you for bringing this to our attention! The retention and use of land lines is so important, for so many reasons! I've written my Assemblyman! THANK YOU!