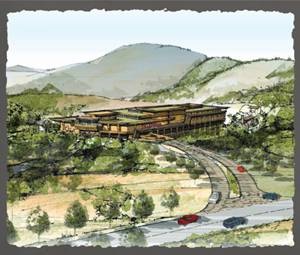 The JAC (Jamul Action Committee) has a history of impeding, challenging and attempting to block the construction of the Casino since its inception. The JAC credits a Round House Talk article.

Raymond Hunter, Chairman of the Jamul Indian Village, had this to say, and told the East County Magazine: “We are pleased that Judge Mueller recognized that Jamul Action Committee’s lawsuit had no merit and recognized that sanctions may be in order for the future. This is just the latest in a string of more than two dozen frivolous lawsuits lost by a small number of individuals trying to deny our right to economic independence.

An overwhelming majority of the community supports our project and the approximately 1,000 permanent jobs it will create in East County.  We continue to work with County officials on an intergovernmental agreement to provide funding for fire protection services and traffic mitigation, among others, and look forward to the opening of Hollywood Casino Jamul-San Diego next year."

The Kumeyaay Nation of Southern California can be traced back 10,000 years.  The Jamul Indian Village is one of 13 bands of the Kumeyaay Nation federally recognized as Sovereign.  These are the people who greeted Juan Cabrillo in San Diego Bay in 1524.

The Jamul Action Committee is a nonprofit group formed in the 1980s to oppose a proposed quarry.   "The JAC Board is disappointed by the ruling, but remains confident that compelling legal arguments exist to continue the fight," JAC President Glenn Revell said.  "We can accept the initial ruling and give in to the suggestion that the proposed casino is a 'done deal' or we can place our faith and support in the compelling legal position that will ultimately stop this project forever."  Revell said the group's counsel stands ready to "immediately appeal."

The judge also denied the plaintiffs’ request for a preliminary injunction to halt construction, saying the federal government doesn’t have the authority to do any such thing on tribal lands.

The judge emphatically denied the group’s motion for a writ of mandate and preliminary injunction seeking to force the National Indian Gaming Commission to do an environmental review and block construction of the proposed Casino.

The NIGC’s mission is: (1) promoting tribal economic development, self-sufficiency and strong tribal governments; (2) maintaining the integrity of the Indian gaming industry; and (3) ensuring that tribes are the primary beneficiaries of their gaming activities.  “Not to arrest private casino construction projects on reservation land before any gaming activities have taken place,” the judge said.

All 27 law suits, motions and attacks have resulted in over a decade of hardships for many of the members of the tiny Jamul Indian Village whose most valuable asset is its proximity to San Diego and the Mexican border crossings at Otay and Tecate.

For more go to: