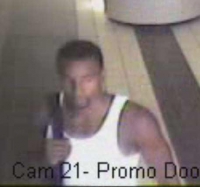 September 19, 2010 (El Cajon) – A woman was robbed in the east parking structure at Parkway Plaza shopping mall on Thursday, September 16 at 11:47 a.m. by a man who also tried to carjack her vehicle. El Cajon police have released a security photo of the suspect, an African-American man, 18-25 with a muscular build and a tattoo on his neck.

The suspect, who was clean shaven, wore a white sleeveless v-neck T-shirt and jeans. He approached the woman as she reached her car and demanded her car keys.  Unable to determine how to start the vehicle, a keyless Lexis, he then stole her jewelry and her purse.

The victim ran for help. The suspect was unsuccessful in his attempt to take the victim’s car and fled the area on foot; he was last seen running west towards Arnele, reported Lt. J.D. Arvan, watch commander for the El Cajon Police.

Anyone with information is encouraged to contact the El Cajon Police Department at 619-579-3311.