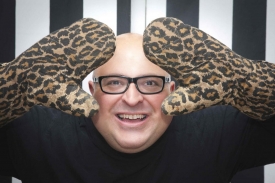 January 12, 2011 (San Diego) – Want to cook up a dish savored by your favorite Hollywood celebrity from a bygone era? Frank DeCaro, author of The Dead Celebrity Cookbook—A Resurrection of Recipes from More than 145 Stars of Stage and Screen, will sign copies of his book January 14 at Babette Schwartz gift store, 421 University Avenue in Hillcrest.

“Frank DeCaro reminds us that many Hollywood celebrities enjoyed cooking long before it was ‘cool.’ The man everyone knows as the movie critic on The Daily Show With Jon Stewart has compiled recipes from over 145 of Hollywood’s favorite stars who are no longer with us, publicist Kim Weiss observed.

According to Weiss, “People are breaking tradition and inviting their favorite “dead celebrities” to their Christmas dinners via their recipes; in fact, having “dead celebrity cooking parties” is fast becoming the latest Hollywood trend.”

The book adds spice to the mix with humorous commentary sandwiched among recipes, so readers can fantasize about  “feasting on Sinatra’s barbecued lamb, taking at stab at Anthony Perkins tuna salad, or wrapping your lips around Rock Hudson’s cannoli,” noted Weiss.

For anyone who loves Hollywood memorabilia, is an entertainment fan, or just loves to cook, the book is a treasure-trove packed with recipes from such late luminaries as  Lucille Ball, Elizabeth Taylor, Sonny Bono, Liberace, Michael Jackson, John Denver, Frank Sinatra, Rock Hudson, Humphrey Bogart, and Peter Falk, just to name a few. 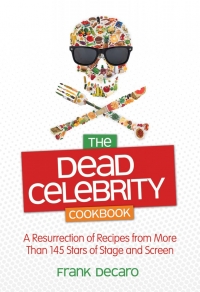 Inspired by a “dead celebrity party” during his college years, DeCaro thought the one thing missing from the event was the food of the dead. Since then, he’s been collecting recipes of the stars and compiled them in put them together in The Dead Celebrity Cookbook: A Resurrection of Recipes from More Than 145 Stars of Stage and Screen (HCI Books – October 2011- $19.95).

DeCaro, who is best known for his nearly 7-year stint as the movie critic on The Daily Show with Jon Stewart, and now heard weekdays on his own call-in radio show, gives us a giggle while feeding us treats from Tinsel Town like: Liberace’s Sticky Buns, Mae West’s Fruit Compote, John Ritter’s Favorite Fudge and Bea Arthur’s Vegetarian Breakfast.

Today, celebrity chefs are the rage.  But in bygone days, there were celebrities who fancied themselves as chefs. They were whipping up culinary delights, and sometimes sharing them with us on shows like Merv Griffin, Mike Douglas or even Johnny Carson. DeCaro gives us some entertaining and informative commentary before each section of recipes in chapters that include: “Talk Show Chow,” “An All-Night Oscar Buff,” and “I Lunch Lucy,” a whole section dedicated to the red-haired TV goddess.

“I miss those days when celebrities still had mystery about them, and a glimpse inside their radar ranges seemed, for any fan, like a window into the world of glamour and excitement, which is why I put together this book,” DeCaro says.

DeCaro writes, "He was one of the great ones--appearing in films as disparate as The Princess Bride and Wings of Desire in the same year, 1987. But no matter what Peter Falk did (and he did a lot), he will always be remembered as the police detective in the rumpled raincoat on the mystery series Columbo."

The Emmy- and Oscar-nominated actor published his memoir Just One More Thing in 2006, and it wasn’t a moment too soon. Falk was diagnosed with dementia two years later.

"Just one more thing," DeCaro concludes. "His pork chops are as toothsome as he was."

Preheat oven to 350°. Brown pork chops in olive oil in a heavy frying pan and remove to a casserole. Cook onions until translucent in same oil and add to casserole. Deglaze pan by adding white vinegar and stirring up all brown bits. Add to casserole along with all remaining ingredients except vinegar peppers. Bake for 1½ hours. Add vinegar peppers and cook 15 minutes more. Remove pork chops and peppers to a warm serving plate. Add 2 teaspoons corn starch to pan drippings to make gravy. Pour over pork chops and peppers and serve. 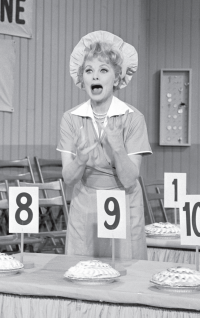 "For Lucille Ball, the preparation of food and drink was an endless font of side-splitting physical shtick. Whatever series she was doing, I Love Lucy, The Lucy Show, or Here’s Lucy, Ball found herself in the kitchen making a hilarious mess," writes DeCaro.

Who can forget Lucy and Ethel's fiasco at the chocolate factory, or her hilarious pie-baking attempts? Or Lucy's attempt at winemaking, that ended in a grapes-to-the-face brawl with an Italian fruit stomper?

"Ball wasn't much of a cook in real life, by all accounts," DeCaro notes. But she hired a personal chef to cook up favorite dishes, such as this one.

Rind of one orange, grated