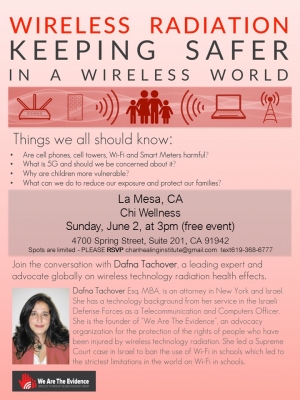 June 2, 2019 (La Mesa) -- A free talk on “5G & Wireless: Keeping Safer in a Wireless World” by a wireless expert and attorney Dafna Tachover, is being held at 4700 Spring St., La Mesa, Suite 201, on Sunday 6/2/19 at 3 p.m.  Tachover previously worked in the Israeli Defense Forces as a telecommunication and computers officer. She is the founder the advocacy group “We are the Evidence” for rights of people impacted by wireless technology radiation and led a Supreme Court case in Israel that led to the strictest limitations in the world on Wi-Fi in schools.

Susan Brinchman with the Center for Electrosmog in La Mesa has been working for three months in an effort to consult with the County on a revision of its recent wireless ordinance approved Feb. 27 for unincorporated areas which she says “fell short in the area of protecting property owners and residents.  The County is now seeking public comments. View the latest draft ordinance: https://www.sandiegocounty.gov/content/sdc/pds/advance/smallcellwirelessfacilities.html

Supervisor Dianne Jacob asked County Public Health Officer Dr. Wilma Wooten for a response to Brinchman’s concerns. Wooten concluded in her response, "Based on the [note: industry science] above explanations, at this time, no additional action regulating electrosmog in public places is warranted."

Dr. Wooten notes that while the World Health Organization has classified wireless radiation as a possible carcinogen, the evidence is largely on high-level exposure. Wooten adds, “The current debate is centered on whether long-term low level exposure can cause biological responses and influence health effects,” adding that increasing distance from cell phones has been the primary recommendation to date for lower level exposure.

Brinchman fires back, “The County is not a representative of industry but of people who live here and elected the Board of Supervisors. The County of San Diego seems to forget that. Making mistakes or neglecting their duties to the people of San Diego County can mean loss of health, life, and property, and they must never forget who they represent and what they are charged with, no matter what. Ignoring health and safety simply isn't legal. A recent court case confirmed this between the city of San Francisco and T-Mobile.”

She claims the County has been negligent in oversight of telecom company installations as well.  In the Crest area of unincorporated El Cajon, she contends, four new “Small cell” 4G towers that could ultimately be used for 5G were installed on SDG&E poles leased by telecom companies. But according  to Brinchman, one was placed in the wrong place on a road and another was set up to send a signal through a home at eye level with a 4-year-old child’s bedroom, on a private street without owner’s permission. “The neighborhood is in an uproar as there are many children and mothers now exposed to close-range microwave radiation,” says Brinchman, who believes permits should be pulled for all small cell projects.

“It will be hard to ‘Live Well’ in San Diego if one is fried by microwave radiation at close range and has their property values plummet as a result of "small cells" or cell towers being placed near homes,” Brinchman, who says her health has suffered due to electrosmog pollution(invisible radiation from wireless commnunications), concludes.

Brinchman provided this link for those with medical issues to file a request for accommodation under the Americans With Disabilities Act with regard to exposure to Wifi and small cell communications devices:

See additional information on the county plans and how to submit comments below:

On February 27, 2019, the Board of Supervisors (Board) directed staff to return to the Board in 180 days with additional requirements for small cell wireless facilities for reducing cluttering, avoidance of sensitive sites, co-location, distance between poles, placement of utility boxes, residential preferred locations, undergrounding of equipment, and additional public noticing. This project proposes changes to the Zoning Ordinance to address the Board direction and to comply with the September 2018 FCC Order.

The draft Zoning Ordinance Update for Small Cell Wireless Facilities is available for public review from May 31, 2019 – June 30, 2019.

Supporting documents include the following:

The proposed schedule leading to Board consideration is outlined below:

Staff will continue to provide project updates as they become available, through the stakeholder email list and through the project web page at https://www.sandiegocounty.gov/content/sdc/pds/advance/smallcellwirelessfacilities.html

I asked the County recently to adopt a policy to reduce electrosmog pollution (from manmade electromagnetic fields proven harmful in tens of thousands of non-industry studies for the past 50 years, including massive government studies). Electrosmog pollution has grown a quintillion times higher in the past 30 years. That's 1,000,000,000,000,000,000 times higher in the past 30 years. But the County Public Health Officer Dr. Wilma Wooten doesn't think that is a problem and cites INDUSTRY-INFLUENCED SOURCES to justify her ridiculous, absurd reply, that reduction isn't warranted. Either she knows nothing about the topic and refuses to learn, OR she is just another industry-puppet. We need someone in that job protecting the health and safety of the public. Dr. Wooten needs to find work elsewhere.

First I wrote Supervisor Dianne Jacob, who passed it down the line, ended up on Wooten's desk. Seems this is how bureaucracy works in San Diego County. Wooten decides pollution isn't bad enough. Uses industry-influenced sources. Doesn't exercise due diligence. So our Supervisor just accepts this absurd position, apparently. These are OUR elected officials, who clearly like pollution if it means industry gets what it wants. WHAT DO YOU THINK ABOUT THIS? Want a microwave-emitting cell tower in your front yard?  POST IT HERE!

I propose that the County Board of Supervisors consider the following proposed policy to reduce electrosmog pollution in our County. If implemented the policy will significantly improve the public health and protect our environment. Its eventual impact will be far-reaching, and is desperately needed at this time, as electrosmog pollution is the fastest-growing form of pollution in our day, and is truly getting to be out-of-control. Please preserve the health of the people, wildlife, animals, insects, and all biological beings in San Diego County, with this one simple but profound commitment. One of the first actions after this order might be the issuance of a second order to reduce sources of electrosmog pollution in public buildings. Just as with second-hand cigarette smoke, once allowed in public buildings where people worked and utilized for a host of reasons, exposure to electrosmog pollution can and should be formally recognized and reduced. County workers and members of the public meeting therein could be the first beneficiaries of a policy whose positive benefits would go far into the future. At the same time, just as with the elimination of second-hand smoke, this policy will save public monies through increased health and reduced healthcare costs. I am available for support on how to begin this process, if adopted.
-----------------------------------
Proposed policy:
A POLICY TO REDUCE ELECTROSMOG POLLUTION
By this Order, the County of San Diego will hereby adopt a policy to reduce electrosmog pollution from manmade electromagnetic fields, throughout the County, in order to improve the public health and environment.

Based on a large, growing body of independent scientific evidence showing a strong association between increased electromagnetic radiation exposure and cancers (including cancers of the brain, heart, eyes, and skin), reproductive harm - including miscarriage, damage to sperm and eggs, DNA damage, autism, Alzheimer's and early dementias, coronary effects and disease - including heart failure, chest pain from impaired blood flow, and heart rhythm abnormalities; eye damage, disease, and vision problems; brain and cognitive impacts - including brain cancers and edema, seizures, hearing problems, including hearing loss, ear pain and shrill "ringing in the ears", obesity, diabetes, and a host of neurological and immunological illnesses, in addition to unnatural rf radiation levels being a probable contributor to climate change, amongst others. Mechanisms include "oxidative stress, mitochondria damage, damage to cell membranes, impaired blood brain barrier, constriction of blood vessels and impaired blood flow to the brain, and autoimmune responses"(1). Therefore, the County of San Diego hereby adopts a policy to reduce public exposure to manmade electromagnetic radiation, also known as radiofrequency radiation, and other strong electromagnetic fields contributing to electrosmog pollution, with the ultimate goal being to restore close to natural levels.