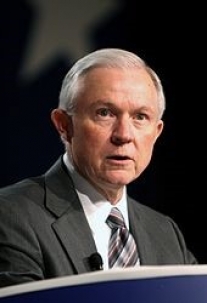 March 2, 2017 (Washington D.C.) – Attorney General Jeff Sessions announced today that he will recuse himself from a federal investigation into the Russians’ interference in the 2016 presidential election, following bipartisan pressure for him to step aside.

The action follows a Washington Post investigative story which revealed that Sessions, while a Senator active in Donald Trump’s campaign last year, met twice with Russia’s ambassador Sergey Kislyak, including a private meeting. But when asked during his Senate confirmation hearing by Senator Al Franken how he would react if he learned that the Trump campaign had talks with Russian officials, Sessions did not tell the truth.

“I have been called a surrogate at a time or two in that campaign, and I did not have communications with the Russians,” Sessions testified under oath.

Ironically, Sessions once voted to impeach President Bill Clinton on perjury grounds after Clinton famously stated under oath, “I did not have sex with that woman,” before DNA testing of Monica Lewinski’s dress proved that the two did engage in a sexual act.

Now some Democrats are calling for a criminal investigation of Sessions for perjury, also urging him to resign.  Prominent Republicans have joined with Democrats in demanding that Sessions recuse himself from the Russian probe, but have not called on him to resign his office or face a criminal probe.

A key question remaining is whether the investigation will now be headed up by the second highest official in the Justice Department, Dana Boente, an Obama appointee, or whether a special prosecutor will be appointed to lead the investigation into ties between Russia, the Trump campaign and key administration officials.  Normally an independent prosecutor is appointed by the Attorney General but given Sessions’ recusal, that would not be viewed as impartial.  Some Democrats are proposing legislation that would have a three-judge panel name a special prosecutor.  But passage would require support from Republicans to investigate the Republican president’s administration.

Jason Chaffetz (R-Utah), powerful chair of the House Oversight and Government Reform Committee, tweeted unequivocally, “AG Sessions should clarify his testimony and recuse himself.” Susan Collins (R-Maine), who introduced Sessions during his confirmation hearing, also called on him to recuse himself.

Four of San Diego’s five Congressional representatives have weighed in with their opinions.

Scott Peters (D-San Diego) stated, “A nominee for Attorney General perjured himself under oath—twice—in the course of his job interview with the Senate about contacts with a foreign government that is known to have interfered in our election.  I ask my Republican colleagues: if that is not cause for an independent investigation and a special prosecutor, what is?”

Darrell Issa (R-Vista) has called for an independent inquiry into Russia’s efforts to sway the presidential election and interactions between Russia and Trump campaign officials, several of whom had strong ties to Russia and Vladimir Putin.  For instance, a former campaign manager of Trump’s formerly worked to rig elections in the Ukraine to election a pro-Putin candidate and allegedly helped launder money for Russian Oligarchs.  Many of Trump’s cabinet officials also have troubling Russian ties, including former National Security Director Michael Flynn, who was fired by Trump after revelations that he lied to Vice President Mike Pence about Flynn’s conversations with a Russian official regarding sanctions against Russia, before Trump was elected.

Susan Davis (D-San Diego) stated, “An Attorney General who needs to recuse himself on an investigation this important should not lead the Department of Justice.” She has called on Sessions to resign.

Juan Vargas (D-San Diego), had this to say.  “It is not enough for Sessions to recuse himself from any Trump-Russia related investigations; he must resign as Attorney General. There must be an independent, bipartisan, outside commission to investigate President Trump’s ties to Russia.”

Duncan Hunter (R-Alpine), an early and vocal supporter of Trump, has thus far not issued a public statement on the Sessions controversy.

President Trump, however, said Thursday before Sessions’ announcement that he has total confidence in Sessions.  He told reporters he believed Sessions “probably” testified truthfully during his confirmation hearing and when asked if Sessions should recuse himself, Trump replied, “I don’t think so.”

http://www.foxnews.com/politics/2017/03/03/sessions-not-alone-russian-ambassador-also-met-with-numerous-democrats.html
against the new administration. . . .Sessions did talk to Russians, not against the law, but apparently not about any campaign matters. No evidence of Russian involvement in the campaign has been produced. The US does have a record of interfering in Russian politics, however.