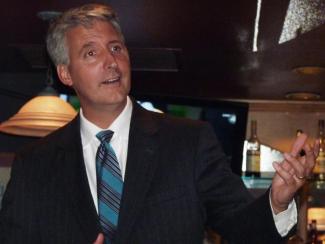 July 10, 2015 (Santee) – How far might the ramifications of the Supreme Court’s decision legalizing same-sex marriages go?  Could the rights of same-sex couples to wed be allowed to impinge on the religious freedom s of business owners, schools or churches?  Might the ruling in Obergefell v. Hodges open the door for legalization of other alternative marriage arrangements such as polygamy?

Those are among the issues discussed at the California Republican Assembly  (CRA) meeting at Jimmy’s Restaurant in Santee last night, where the featured speaker was Brad Dacus (photo, left), president and founder of the Pacific Justice Institute. A frequent guest speaker on national TV news shows and host of a radio program, attorney Dacus specializing in representing people of faith in religious freedom cases. 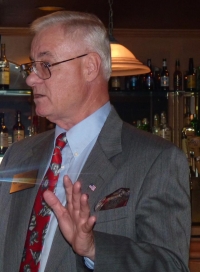 Santee Mayor Randy Voepel (photo, right), a candidate for the 71st Assembly District seat being vacated by Brian Jones due to term limits, also addressed the group to seek endorsement.

Sylvia Sullivan led off the meeting by describing the CRA as the “conscience of the Republican party”, with a mission to help elect Republicans who follow the party’s platform and hold them accountable once they are elected.

Frank Hilliker introduced Voepel as “the man who kept reserves in the city’s coffers without raising sales taxes.”

Voepel quipped that he deserves support because “I haven’t been indicted in 15 years,” then recounted his early days in office, when he was the swing vote to fire the city’s manager and improve the city’s finances. “We have the lowest pension obligation in the county,” he says, attributing that to the city’s use of private sector contractors and non-union employees, other than fire department and Sheriff’s deputies; the latter union has endorsed Voepel, he says. Keeping pension debt low kept Santee in the black while other local cities have struggled, he noted.  Santee also has the lowest sales tax among East County cities.

Voepel objects to those who have referred derisively to the predominantly white Santee as “Klantee”.  “I say no, we’re the La Jolla of East County,” he states, noting that Santee has the seventh highest income per capita in the County.  If  elected he pledges to “get the government off your back” and eliminate waste.  He also pledged that if sent to Sacramento, he will work to identify the weakest Democrat in the legislature and help the Republicans win back the seat.  The number one priority for Republicans in Sacramento should be “making sure Democrats don’t have a super-majority,” he believes.

A military veteran, he says he can be a “dangerous man” who delivers on promises. “I want to be a Republican insurgent and cause trouble in Sacramento,” the ever-outspoken Voepel says with a grin.   He has raised a war chest of over $100,000 and says he’s stepping down from mayor and will soon be selling off his insurance business to retire.

Asked by an audience member his views on the same-sex marriage ruling by the Supreme Court, Voepel replied, “Personally I’m a Southern Baptist. I do not support gay marriage in a Biblical way but it’s the law of the land.” He added that he thinks if more Christians had stood up the decision might have been stopped.

After hearing the next speaker, however, Voepel asked Dacus for tips on how to field that question.  Dacus advised candidates to say they don’t believe gay marriage is a constitutional right, that they support states’ rights, but that everyone is deserving of respect—points with which Voepel said he agrees.

Dacus said the ramifications of the Supreme Court’s ruling will be far-reaching.  For example, owners of businesses in the wedding industry such as florists, bakers and photographers are having their businesses impacted.  He cited as an example a 70-year old grandmother who had provided flowers to a gay individual for various occasions in the past, but declined to provide flowers for his wedding because it is a religious ceremony and it conflicted with her religious views.  A Washington-state prosecutor ruled that the florist had to provide the flowers or shut down her business.  A similar case in Colorado resulted in a judge ordering a baker to undergo tolerance training and serve the needs of a gay couple’s wedding.

Six of the seven largest states have now passed Religious Freedoms Restoration Rights acts to protect the rights of business owners not too be forced to participate in same-sex marriages if they have religious objections, but California has not done so.  While some see California as standing up for new-found civil or constitutional rights, others see the issue as failing to respect diversity of all religious views, including those of Christian business owners or business owners of any religion that does not condone same-sex marriage.

A local pastor, Tony Sotile, likened the situation to Sharia law imposed by Muslim extremists on territories they have conquered in the Middle East, where Christians who practiced tolerance are now forced to convert or “die by the sword.” While no one in the U.S. is advocating death of people who oppose gay marriage, some in the religious community do fear a loss of their rights to exercise their beliefs.

Dacus agrees with a “scathing” dissent penned by Chief Justice John Roberts, who contended that the ruling “had nothing to do with the Constitution.” Dacus said he was surprised that the high court ruled gay marriage legal not solely through the 14th amendment’s equal protection clause, but more broadly through its due process clause which the court also used to justify the Roe v. Wade case that legalized most abortions.  He faults the court for not looking at history and tradition and for establishing what he terms “the concept of freedom of sexuality.”

Dacus suggest that could be used to later legalize other non-traditional marriage arrangements such as polygamy or adult incest.

On this point, Dacus might be incorrect.  Justice Kennedy, writing the majority opinion, specifically stated that the court could find “no risk of harm to themselves or third parties” by allowing same-sex couples to marry. By contrast, various studies have found polygamous marriages contribute to numerous societal problems. For example, researchers at the University of British Columbia found “significantly higher levels of rape, kidnapping, murder, assault robbery and fraud in polygynous cultures.” According to the research, “monogamy's main cultural evolutionary advantage over polygyny is the more egalitarian distribution of women, which reduces male competition and social problems.”  Similarly, a court could deny a “right” sought by an adult incest couple due to health concerns over children conceived through inbreeding—the reason marriages between siblings and in some states, cousins is illegal currently.

Dacus offered assurance to churches that he does not believe the ruling in any way will require churches to perform gay marriages, and indeed the court’s majority opinion itself clearly states this.  However he suggested churches adopt model guidelines to protect themselves legally; those are available free from the Pacific Justice Institute.

He does, however, foresee that 501c3 organizations could lose nonprofit status and believes civil rights lawsuits will target religious schools that refuse to be tolerant by hiring faculty who have same-sex spouses.  There is precedent in a case involving Bob Jones university, which claimed it believed inter-racial marriage was sinful, but lost that case in court. Schools that do not practice tolerance of same-sex marriages could lose eligibility for Pell Grants to help students, for instance, Dacus suggested.

He believes litigation ill continue seeking to expand rights for same-sex couples and potentially make others “victims” by taking away their religious freedoms.

But he sees “spirituality” as the real challenge facing religious Christians and other people of faith in a society that even Dacus acknowledges has changed rapidly with a majority of Americans now supporting same-sex marriage, he pointed out.

He urged people of faith to have “empathy and sympathy” for gay and transgender people, showing respect even while disagreeing.

An audience member asked about civil disobedience, which some prominent Republicans including presidential candidate Mike Huckabee have called for to oppose the court’s decision.  Dacus did not endorse civil disobedience, but stated that he does not believe anyone should be forced to not follow their beliefs or compromise what they believe in. He believes religious freedom is at greater threat today than at any time in U.S. history.

Despite the challenges that lie ahead to sort out the boundaries of religious freedoms in the wake of the Supreme Court’s landmark ruling, Dacus concludes, “Marriage will survive. It is resilient.”  But in redefining marriage, he also believes, “No one deserves more protection than anyone else. No one should have to choose between hanging up your business or compromising your faith…Religious freedom is a constitutional right that must be protected.”