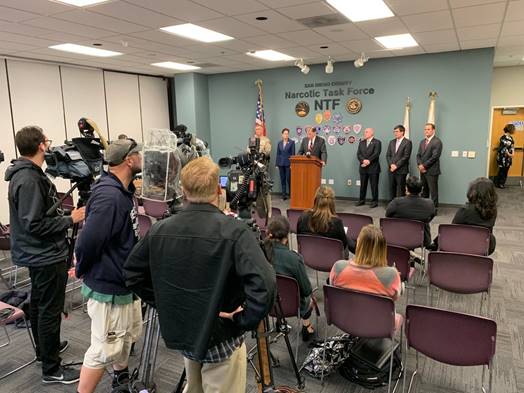 During the coordinated takedown that began early in the morning on May 21, agents executed over a dozen search warrants. Agents seized approximately 80 pounds of methamphetamine, four firearms and more than $100,000 in U.S. currency during the investigation. As of today at 1 p.m., 32 of the 43 defendants are either in federal or state custody. Authorities are continuing to search for 11 defendants. Many of the defendants are scheduled to be arraigned before U.S. Magistrate Judge Linda Lopez at 10:30 a.m. tomorrow.

According to the indictments and other publicly filed court documents, this San Diego based network supplied multi-kilogram quantities of methamphetamine and gamma-hydroxybutyrate to dozens of sub-distributors located throughout the United States and the world, including California, Arizona, Oregon, Wyoming, Texas, Arkansas, Florida, Virginia, Washington, D.C., New Jersey, New York and the United Arab Emirates. In return, tens of thousands of dollars in narcotics proceeds were returned to the network’s leaders via shipments of bulk cash, structured cash deposits into bank accounts and online money transfer systems like PayPal, Zelle, Venmo and Cash App.

The defendants operated the drug trafficking scheme by arranging for the shipment of large quantities of methamphetamine from San Diego to various locations in the United States and internationally, through FedEx and the United States Postal Service. The drug shipments were mailed weekly to various hotels, residences and Airbnb locations. As part of the scheme, the defendants also created multiple fraudulent FedEx accounts. These fraudulent FedEx accounts were billed to and paid for by large corporations, in hopes that the large businesses would not notice the illicit packages.

Despite their sophisticated efforts, law enforcement penetrated this network with a variety of investigative techniques, including physical surveillance, obtaining phone records, financial documents tracking warrants on telephones and vehicles and undercover agents. Over the course of the investigation, agents obtained dozens of search warrants and a six-month-long federal wiretap to track the communications and the location of the defendants. In conjunction with the wiretaps, agents ultimately seized approximately 78 pounds of methamphetamine and four firearms tied to the network.

“The Sinaloa Cartel relies on members of our communities to distribute their drugs. Because they manipulate our commercial distribution routes to make a buck, our streets are flooded with high purity and low cost methamphetamine,” said DEA Special Agent in Charge Karen Flowers. “Without their distribution networks, such as the one dismantled today, cartels would not be able to operate drug businesses that rival Fortune 500 companies and dangerous drugs, like methamphetamine, would be scarce, expensive and of low purity. The operation today will ultimately disrupt the supply chain, diminish profits and make it harder for the Sinaloa Cartel to do business in the United States. Just as important, today’s operation sends a message: If you’re profiting from drug addiction, you will be pursued relentlessly by DEA, regardless of your role in the distribution network.”

This case was led by the DEA’s Narcotics Task Force and the Internal Revenue Service. The NTF is a DEA-led task force comprised of federal and local law enforcement from the DEA, San Diego County Sheriff’s Department, the San Diego Police Department, the Escondido Police Department, United States Border Patrol, IRS and the San Diego County Probation Office. Agents and officers from the United States Marshals Service, the United States Postal Inspection Service and the Federal Bureau of Prisons also provided vital assistance for the investigation. Attorneys from the Department of Justice, Office of Enforcement Operations, Electronic Surveillance Unit, likewise provided critical work as part of the investigative team.

Hope they arrested some in El Cajon, and locked them up for a long time. This city is rife with drug addicts!