31 rescues since June; firefighting aircraft diverted to save hikers 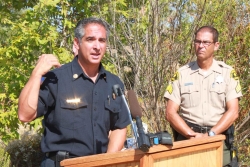 August 3, 2011 (San Diego’s East County)—East County is home to some of the most adventurous and beautiful hiking trails in San Diego. Trails such as Cedar Creek Falls have recently been in the media due to the tragic loss of Joe Meram, an El Cajon teen who fell to his death three weeks ago while attempting to navigate the trail.

On July 26, the Sheriffs Search and Rescue (SAR), Cal Fire and other agencies held a news conference at Mission Trails Regional Park to inform hiking enthusiast about safety tips. A volunteer team from SAR performed a mock search and rescue so that a more realistic portrayal of the seriousness of the situation could be viewed by the public.

“A lot of videos that are on YouTube show how much fun it is going to the falls and a lot of young people are going up there ill-prepared,” said Lt. Todd Richardson. 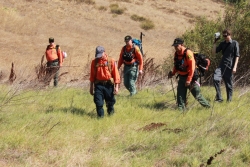 Because of this, the increase in rescue efforts has soared to 31 since June. Richardson said that the numbers of rescues has resulted in firefighting aircrafts being pulled away from firefighting duties to go out to the East County and perform the rescues from the trails.

As a result of the recent tragedy, the U.S. Forest Service has closed the trails leading to Cedar Creek Falls until November. Authorities are concerned that may drive people to a more remote fall in Pine Valley called Three Sisters. It is said that the trails leading to Three Sisters are even more rigorous than the ones leading to Cedar Falls, which is one of the main reasons these agency have teamed up for the safety briefing. 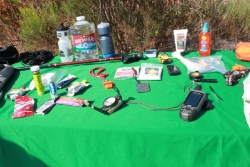 In a safety debriefing, experts laid out “must have” safety items on a table to give a visual of what a typical hiker should be carrying. Items included plenty of water, first aid kits, a whistle, reflective S.O.S. mirrors, flashlight, matches, cell phone, walky-talky, emergency blanket, snacks and more. Representatives from each agency explained the importance of key items, especially water.

One biker at Mission Trails said that she was plenty prepared for being in the back country. “It is hot and dry and you have to be prepared,” Toni Decrescenzi said, “I got lost of track today, but I wasn’t worried because I had everything I needed to get out of a bad situation.”

Search and Rescue Agents said there have been at least 150 rescues in all this year. Sixty alone have been due to heat related issues such as dehydration. Authorities urge hikers to carry ample supplies of water when hiking the dry and barren trails of San Diego. For more information visit the Sheriffs Search and Rescue website.