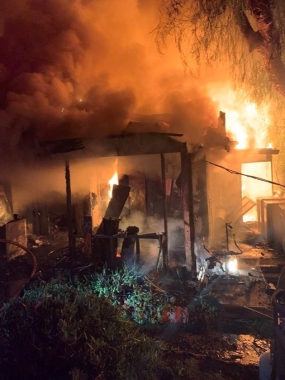 November 27, 2021 (Ramona) – The medical examiner has identified the woman found dead after a fire at her home as Deborah Ann Hester, 61.

Based on preliminary law enforcement investigation, on the early morning hours of November 15th, Hester called 9-1-1 and requested emergency assistance due to a fire at her residence. San Diego County Sheriff’s Deputies arrived at the decedent’s residence at 566 Telford Lane in Ramona and heard her screaming for help.

They forced the door open and made several attempts to reach the woman inside the home, but the house was quickly engulfed in flames,” says Sergeant Greg Hampton. “With smoke and flames overwhelming the deputies, they were forced to leave the house and were unable to rescue the woman inside.”

The San Diego Union-Tribune reports that Hester was in a wheelchair and unable to respond to deputies’ directives to escape by crawling out.

Cal Fire arrived and found the house was engulfed in flames. Once the fire was extinguished, the decedent was found in the hallway and her death was confirmed.

Three deputies who tried in vain to save  Hester were treated at a hospital for smoke inhalation.

The cause and manner of the victim’s death will be determined by an autopsy.

“There is nothing suspicious about the fire at this time. What exactly started the fire remains under investigation,” says Sgt. Hampton.  The Sheriff's Bomb/Arson Unit investigates all fires resulting in serious injuries or death.