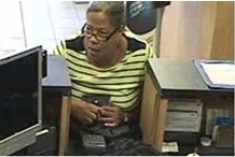 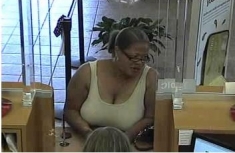 August 3, 2011 (La Mesa)—La Mesa Police have released surveillance photos of two women suspected of being part of a team of African-American female targeting elderly women as they shop for groceries throughout San Diego County.

The first victim, 65, from San Diego was shopping at Windmill Farms in Del Cerro on June 3rd when she was approached by a heavyset, African-American woman with medium-length graying hair and reading glasses. The suspect distracted the victim with questions and stole the victim’s wallet from her purse. Within two hours, the suspect had created a false California ID card in the victim’s name, and, using the victim’s stolen credit cards, made a $2,000 cash advance at Chase Bank in La Mesa. Additional fraudulent purchases were made at Office Depot in La Mesa for approximately $500.

On July 6, a heavyset, middle-aged African-American female suspect approached an 85-year-old female shopper at the Ralph’s on Grossmont Blvd., La Mesa. The first suspect distracted the victim with questions, while the second suspect, also a middle-aged African-American female, stole the victim’s wallet from her purse. In the hours following the theft, the suspects used the victim’s stolen credit cards to make cash advances totaling $3,000 at the Citibank in La Mesa, and fraudulent purchases of about $500 at the Macy’s in La Mesa.

A third incident occurred on July 8, 2011, at the Von’s in Carlsbad. The team of suspects approached a 63-year-old female shopping in the store. When her back was turned, the thieves stole her wallet from her purse, which was in her shopping cart. In less than an hour, the thieves used the victim’s stolen credit cards to make cash advances totaling $3,500 at the U.S. Bank and Chase Bank in San Marcos.

Anyone with any information on the suspect is asked to call the La Mesa Police Department at (619) 667-1400 or the Crime Stoppers’ anonymous tip line at (888) 580-8477; you can also email or text anonymously at wwww.sdcrimestoppers.com. Crime Stoppers is offering up to a $1,000 reward to anyone with information that leads to a felony arrest.