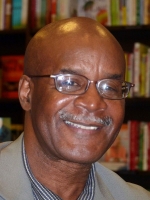 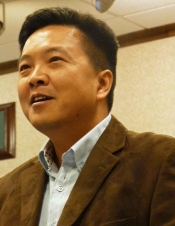 April 11, 2011 (La Mesa) – Break some rules and pick a pen name similar to your favorite best-selling author. Those were among the creative tips offered by Joshua Graham, local author of the best-selling legal thriller Beyond Justice.

Graham joined with local authors T.J. Johnson and Linda Loegel Saturday in a free forum for aspiring writers offered at Barnes & Noble bookstore in Grossmont Center, La Mesa.  The forum, organized by East County Magazine book reviewer Dennis Moore, drew a standing-room-only crowd.  It also attracted literary luminaries including other authors, publishers, and journalists. Panelists offered insights into how the publishing industry has changed dramatically as well as new strategies available for authors to get published and market works.

Among the topics address were the merits of self-publishing versus using a traditional publisher, whether one should invest in editing services, do you need an agent, and how authors c 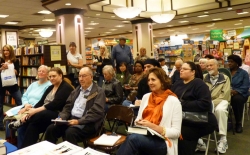 an promote their books even on a shoestring budget.

Graham revealed that he intentionally chose a pseudonym similar to John Grisham, a famous author of legal thriller fiction, “so my books will be next to his on the shelves,” he revealed. The strategy worked. Beyond Justice became the #1 best-selling novel on Barnes & Noble e-books. Books by Graham have also emerged as best-sellers overall in Barnes & Noble’s thriller category. 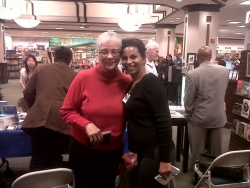 Some publishers’ websites state that they will not accept queries for unagented materials. “That’s a myth,” Graham said. “I’ve always ignored that and sent it in anyway.” Some publishers responded by asking to see a full manuscript. The best-selling author added that authors who represent themselves can get lists of publishers and contacts through Publishers Marketplace.

Gone, too, are the days of printing out reams of paper, boxing up your manuscript and incurring hefty postage bills. “I only do electronic submissions now,” said Graham. “In one day, I sent out about 45 queries.” He added, “Getting in print is easier, but getting your work recognized is harder.” 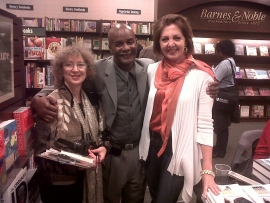 Graham noted that authors can now publish their own works through www.pubit.barnesandnoble.com and Kdp.amazon.com and have those major bookseller sites sell them, or use tools such as Lightning Source, Create Space, and Smahswords. This has also dramatically shortened up the timeframe to get published and opened new outlets such as publishing for I-Pads. While a conventional publisher may still take two years or so from purchase to publishing date, self-publishing can get a book into print within 48 hours. 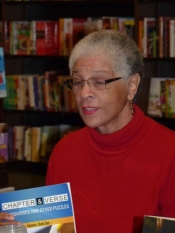 T.J. Johnson is a self-publisher author who does her own marketing for her book, Chapter and Verse: Crosswords and other Puzzles, Genesis- Book One. She utilizes a writing critique group and advises that it’s easy to miss your own mistakes. “Even if you have to pay someone, it’s worth it to get editing done.” She advises writers to “take a look at a lot of different publishers and do a comparison.”

The authors indicated that use of social networking sites helps boost sales. “Most of my promotions have come through Facebook,” said Graham. “I also use Twitter and a blog,” he said. In addition, he utilizes tools such as Kindle and Nook through Amazon and Barnes & Noble. “When I did, suddenly my sales started growing,” he recalled. 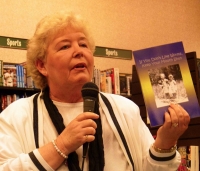 Linda Loegel, author of Bumps Along the Way and If You Don’t Like Worms, Keep Your Mouth Shut is president of the Alpine Writers Guild. Her books describe a humorous cross-country trip with her husband and recollections from her childhood. She used a traditional publisher for one book and self-published the other through Lulu.com, which takes a percentage of sales but charges authors zero up front.

“I now get 90% of royalties on one book and only 10% on the other,” says Loegel, who is an advocate of self-publishing for that reason. She also advises authors to “never trust Spellcheck.”

ECM book reviewer Dennis Moore, host of Saturday’s event, offered this advice for writers. “Rejection is like a job interview. You’ll get rejected so many times, but then you get accepted and you’re set.” 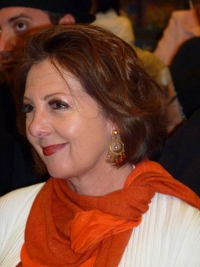 Jane Mitchell, Emmy Award-winner, host of Channel 4 TV’s “One on One with Jane Mitchell” and author of One on One, My Journey With Hall of Famers, Fan Favorites and Rising Stars was among the celebrity authors who stopped by the event. Mitchell graciously fielded a question or two from audience members. She opted to self-publish her book in hard-cover and insisted on large print so her mother could read her work. Despite her fame on local TV, Mitchell had over 80 rejections and recommended a book titled The shortest distance between you and a published book.

Other local literary leaders who turned out to show support for the event included Pete Zindler, author of Seeds of Greatness and Spirit Warrior; Betty Pegas, author of Chasing a Dream in the Galapagos: A Personal Evolution, Krista Pettiford, author of Surrendered Balance, and Judith Rubenstein, CEO and publisher of Granite Hills Press and author of Essentials of Reading and Writing English. In addition, D.J. Dunnivant from San Diego Voice and ViewPoint Newspaper, Dee Sanford from African American Business Women with Vision, and Miriam Raftery, editor of East County Magazine and author of 100 Books That Shaped World History and other books, were also present at the event.

Max Thurman, 93-year-old author of The Obesity Solution and Cancer Rip-off, was scheduled to participate on the panel but was unable to appear due to a health issue. 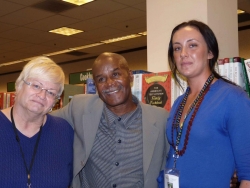 ECM wishes to thank the helpful staff at Barnes & Noble in Grossmont Center for their sponsorship of this highly informative and entertaining event.

East County Magazine welcomes opportunities to partner with other organizations interested in having local authors speak and sign copies of their books. ECM also seeks sponsors to support our San Diego Bookshelf section, which reviews works primarily by local authors as well as a selection of national authors’ works. 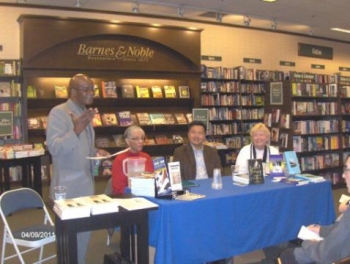 I am honored to have received an Authors' Review Copy of Joshua Graham's forthcoming book, "DARKROOM." I trust that I can do as good of a book review with it as I did with "Beyond Justice."

Thanks for sharing these ideas. Keep on posting! Kuba Jewgieniew

Thanks for your comments Kuba about our East County Magazine sponsored event at Barnes & Noble in San Diego (La Mesa), which I moderated. Regards, Dennis

It was a privilege for me to be in the company of writers and future writers Saturday. I sincerely hope Barnes & Noble continues what was started and makes this a monthly event. Kudus to Dennis and the B&N staff for pulling this all together. Linda Loegel, author of "Bumps Along the Way" and "If You Don't Like Worms, Keep Your Mouth Shut."

What an honor it was to moderate such a talented panel of authors at Barnes & Noble, TJ Johnson, Linda Loegel and Joshua Graham.

Hey thanks for sharing this. This will be a great help. Keep writing.

Knowing Joshua Graham, I'm sure I would've enjoyed his part of the discussion. And, then, with the rest of the line-up... Wow! Sometimes living on a remote island has its disadvantages. Sounds like a great event. -Susan Wingate.