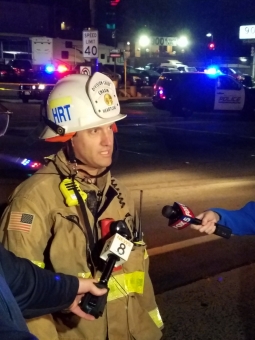 Updated at 11:02 with information on burn victim and estimated damge.

The fire was reported at 9:13 p.m. by a caller from a nearby Walmart who was involved in the fire. He has been transported to the UCSD Medical Center burn unit.

Division Chief Mike Chasin told the press that this is the second fire at a car dealership recently, following a fire at a Mercedes Benz dealership last week.

Chemicals were found at the scene tonight and an arson investigation will be done, Chief Chasen confirms.. ECM reporter Paul Kruze reports at least eight fire engines were present to battle the blaze. A Hazmat unit arrived at 10:45 p.m.

The building owner is at the scene but has not been admitted to the building.

El Cajon Blvd. is closed in one direction at Wilson and traffic is being diverted. The trolley is still operating.

Heavy smoke can be smelled as far away as La Mesa and Mt. Helix. 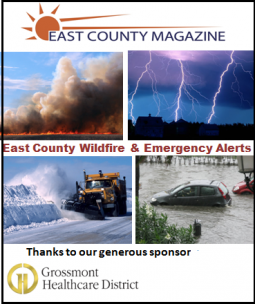 Sign up to receive free East County Wildfire and Emergency Alerts via email at the top right side of our homepage and you can also receive our free weekly e-newsletter. You can also follow EastCountyAlert on Twitter for brief text alerts. We recommend all of the above, since you don't know what form of communication will work best in a major regional 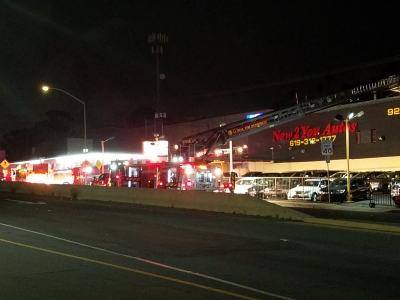