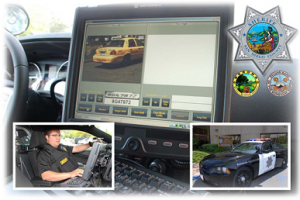 "Sycuan is proud to partner with the Sheriff's Department on this project," said Chairman Daniel J. Tucker of the Sycuan Band of Kumeyaay Nation. "Being involved is part of the Kumeyaay Spirit. The grant shows Sycuan takes its responsibility as a good neighbor very seriously and is dedicated to making Valley Center and San Diego County a safer place for everyone."

''Barona is proud of the nearly $29 million in grants that have been awarded by the Indian Gaming Local Benefit Committee since 2003 to a variety of important programs in San Diego County," said Chairman Edwin ''Thorpe'' Romero of the Barona Band of Mission Indians. "This grant will make a significant difference for the Sheriff's Department in the critical work they do every day throughout the San Diego community."

The car uses cameras that scan the roadways and parking lots for wanted and stolen cars day or night. A computer runs the license plates against a California database. The database may contain plates of stolen cars, cars of wanted felons, cars with stolen plates, cars wanted for certain crimes, missing persons, AMBER Alerts or any other lawful reason. If a license plate that was captured matches an entry on the database, the system will alert the deputy.

This technology is a force multiplier. It will provide increased efficiency for deputies on patrol as well as increased safety and proactive law enforcement for tribal members and casino guests alike. The mission is to more quickly recover stolen cars, reduce car thefts, arrest people wanted for car thefts and other crimes. This crime fighting strategy will provide great security and safety for the community as a whole.