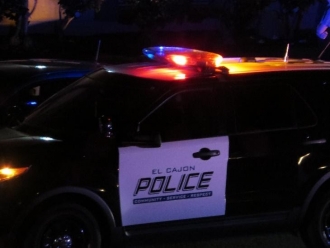 East County News Service
December 2, 2020 (El Cajon) – An autopsy conducted by the San Diego County Medical Examiner’s office confirms that Stephan Anthony Harris, 29, of El Cajon died of multiple blunt force injuries caused by being struck by a vehicle on November 25.  The finding refutes claims made by Harris’ family.
According to the El Cajon Police Department (ECPD), officers and paramedics responded at 8:30 a.m. on Nov. 25 to reports of a pedestrian struck by a white Mercedes car in the 300 block of West Chase Avenue. Harris was pronounced dead at the scene by paramedics.
The driver, a man in his 20s en route to a store, and a male passenger “stopped immediately after the collision to divert traffic and to render aid to Mr. Harris,” according to a press release issued by ECPD.
According to the ECPD, “The driver is not suspected of being under the influence of drugs or alcohol. Excessive speed is not believed to be a factor in the collision. The driver and his passenger remained at the scene and have been fully cooperative in the ensuing investigation. Several witnesses to the collision were identified who confirmed Mr. Harris suddenly walked into the roadway when he was struck by the passing vehicle.”
Police state that surveillance footage from a nearby convenience store revealed Harris going in and out of the store and parking lot. The ECPD press release claims, “Mr. Harris appeared to be intoxicated, as he can be seen stumbling, dropping items, and walking with an unsteady gait. Harris was dressed in dark colored clothing, including a dark hooded sweater that was pulled over his head. Just before the collision, Harris can be seen stumbling toward Chase Avenue, where the collision occurred moments later.”
ECM has requested a copy of the surveillance video.
The release further states, “ Officers responding to the collision recognized Mr. Harris from numerous prior contacts at the same location. A recent contact between Harris and the El Cajon Police involved Harris highly intoxicated and resisting arrest by walking and running in the roadway. Mr. Harris had been contacted no less than 15 times in the past 12 months for Harris creating a disturbance, being intoxicated, and trespassing.”
According to the Medical Examiner’s office, a toxicology test is pending.
Members of Harris’ family arrived at the scene after his death, however according to police, “The family immediately began to falsely accuse the El Cajon Police Department as being involved in Harris’ death. The family also shouted profanities, racial slurs, and homophobic statements about officers on scene. Members of Mr. Harris’ family vocalized a conspiracy theory that the El Cajon Police Department had been stalking Mr. Harris, and they shot and killed him at the scene and were trying for cover it up and hide his body.”
The County Medical Examiner’s office picked up the body at the scene. Yvette Urrea Moe at the County Medical Examiner’s office has confirmed to ECM that there were no gunshot wounds on the body.
Family and friends of Harris organized a protest on November 30, also posting their claims, without evidence, on social media.
During the protest, members of the group obstructed traffic in the area as they blocked lanes of travel holding signs and shouting at motorists., according to the ECPD release, which adds,”At one point, one of the protestors caused damage to a passing vehicle by kicking it. A report for vandalism was completed. A report was also taken from a victim who stated one of the protesters pointed a handgun at them.”
In response to this incident, Francine Maxwell, President of the San Diego branch of the NAACP reached out to the El Cajon Police Chief and offered this statement:
“The NAACP San Diego branch was contacted by a member of the branch regarding a death of their family member. The president Francine Maxwell reached out to the chief of police of El Cajon and received preliminary details and I also obtained information from the Captain. I offered my condolences and prayers to the Harris Family and I shared the details with a Harris family member. Although the information wasn't well received, the police department has tried to share as much as they could of the early stages of the investigation.”
Maxwell adds, “The NAACP San Diego branch believes in peaceful protest and people exercising their right to lawfully assemble. We urge everyone to assist the family in their grieving process and wait to receive the reports from the investigation.  We understand that there is a history of interactions between the department and the family and we hope that both sides would have the opportunity to sit and go over everything peacefully and respectfully when time permits. The NAACP San Diego branch respectfully requests that those who decide to assemble peacefully do so without interfering with traffic flow or any disruption to the flow of business that needs to occur near the building. The NAACP San Diego branch stands ready to assist the El Cajon police department and the Harris Family come to have a conversation in the near future.”
ECPD issued this statement: “The El Cajon Police Department has been, and continues to be, completely transparent in the response to this incident and subsequent investigation.”