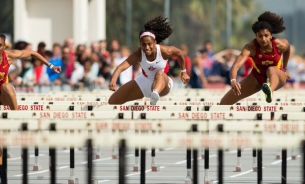 April 25, 2017 (San Diego) - San Diego State senior Micha Auzenne was named the Mountain West Women's Track Athlete of the Week for meets held April 21-22. The honor comes on the heels of her win in the 100-meter hurdles at the Triton Invitational, during which she ran a collegiate best and the fifth-best time in SDSU history.

This is the second weekly conference honor of Auzenne's career, and her first career outdoor track weekly accolade.

Auzenne raced to a collegiate best and the fifth-best time in program history in the 100-meter hurdles on Saturday at the Triton Invitational with her 13.19 time. She won the event for the sixth time in her career. The time is the 18th fastest run in NCAA Division I this year, and the fastest run by any MW student-athlete this season.

Last weekend, San Diego State won UC San Diego’s Triton Invitational, thanks to four individual event champions and 16 top-five finishes. At No. 34, the Scarlet and Black is one of three Group of Five schools ranked in the top 34, and are the highest ranked Mountain West school. SDSU is the fourth-ranked team in the West region.

This weekend, Auzenne is one of 15 Aztecs competing at the prestigious Penn Relays, where she will compete in the 100-meter hurdles and the 4x100-meter relay. The meet gets underway Thursday, April 27. The remaining Aztecs will head to the adidas/Steve Scott Invitational, hosted by UC Irvine, on Friday, April 28 and Saturday, April 29.