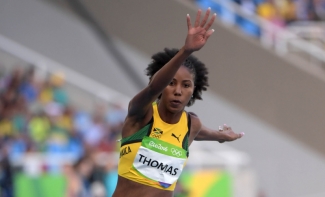 Thomas-Ricketts and Whitney Ashley qualified for the 16th IAAF World Championships, scheduled for August 4-13 in London, with respective second-place finishes at their senior national championships in the triple jump and the discus throw. Both competed at the 2016 Rio Olympics. Thomas-Ricketts represented Jamaica in the triple jump and Ashley competed for the United States in the discus throw.

At the Jamaica Senior National Championships, Shanieka Thomas-Ricketts took home silver in the triple jump with a 47-foot, .5-inch (14.39m) leap. The 2016 Olympian for Jamaica and a three-time NCAA triple jump champion for SDSU (2013-14 outdoor, 2014 indoor) was a seven-time USTFCCCA All-American and a nine-time MW champion for SDSU. Thomas-Ricketts’ second-place finish and qualifying mark (over the 14.10m entry standard) earns her a spot on the Jamaican National Team at the IAAF World Championships.

At the USA Track and Field Outdoor Championships, Kortney Ross placed fifth in the pole vault. She tied a career mark with her 14-foot, 11-inch (4.55m) vault on her third attempt of the progression. Ross, who was participating in her first U.S. senior outdoor championship meet, has now finished ninth-or-better in all 13 meets in which she has competed since March 2016. The two-year Aztec (2012-14) placed fourth at the USATF Indoor Track and Field Championships earlier this year.