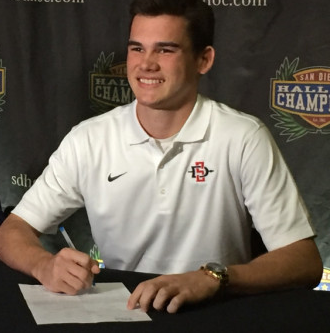 November 10, 2016 (San Diego) - San Diego State baseball Head Coach Mark Martinez has announced the signing of 12 athletes for the 2018 season. The group of 12 incoming players, all of who will be freshman when they arrive on campus, includes consists nine pitchers, two infielders and an outfielder. Four of the signees double as position players in addition to pitching.

The group includes athletes from local highs schools including one each from Eastlake HS, Scripps Ranch HS, Santana HS, Valhalla HS and Montgomery HS. Six of the signees ranks among the top 20 in the state of California at their position with one ranking among the top 70 players in the country.

“First of all, I would like to thank our recruiting coordinator Joe Oliveira and pitching coach, Sam Peraza, for their hard work putting this class together,” commented Aztec Head Coach Mark Martinez. “This is another nationally-ranked group of players that we are bringing to campus. This is a special class that not only fits our needs for next year, but well into the future. We feel like these guys will help our team take a step forward with their talent.

“This recruiting class is a solid combination of arm strength on the mound and talented position players. We always try to find guys that will not only help us on the baseball field but also have high character to represent our program well off the field and we feel that these guys will help us continue our strong culture within the program.”

Below is a rundown of the Aztecs’ 2017 recruits with their class standing upon arrival on campus next fall:

Ritcheson is ranked as the 69th-best overall player in the country and fifth-best RHP in California by Perfect Game. He was selected to play for the Brewers Area Code Team last summer. He won three games as a junior with a 2.48 ERA. He recorded 59.1 innings pitched while striking out 58 and only allowing a .201 batting average against. He also competes for nationally-ranked California Baseball Academy (CBA) during the summer and fall, along with fellow Aztec signees Matt Rudick and Noah Fluman.

“Daniel is a physical RHP with a big arm. His fastball has reached the mid 90’s to go along with a solid four-pitch mix. He has really developed since we originally committed him and has put himself in position to come in and throw major innings for us right away as a freshman.”

Schmitt is ranked as the 264th-best over player in the country and third-best third baseman in the state of California by Perfect Game. He hit .500 as a junior with seven home runs while also serving as the closer for his team. He led Eastlake HS to the CIF championship game for the second year in a row. He also plays for the San Diego Show, a nationally-ranked travel ball organization, in the summer and fall alongside fellow Aztec signees Casey O’Sullivan and Jose Cerda.

“Casey is local kid that we are excited to keep home in San Diego. He is an extremely talented baseball player and has a chance to be a legitimate two-way player for us. He is an athletic infielder with big time power potential and has a big arm on the mound that has already reached the low 90’s. We expect Casey to have a huge impact for us immediately.”

Rudick is ranked as the 14th-best outfielder in the state of California by Perfect Game. As a junior he hit .481 with five home runs while also throwing 28 innings with a 1.48 ERA as the team’s closer. After the season, he was named the Eastern League Player of the Year. He is a former member of the 15u USA team and also plays with CBA, alongside fellow signees Daniel Ritcheson and Noah Fluman.

“Matt is another local player that we are happy to keep home. He has proven himself to be one of the best pure hitters in the county. He is a fast twitch outfielder who can also get on the mound from the left side. The sky is the limit for him.”

Parra is ranked as the 18th-best shortstop in the California by Perfect Game. He was named to the all-league team after having a stellar junior season. He also competed in national events all over the country with his summer teams, Baseball Performance Academy (BPA) and Saddleback Cowboys.

“Isaiah is a dynamic player that can play the middle of the field. He has a high baseball IQ and continues to get better and better. He has added some strength to go along with his speed and has put himself in position to compete for a starting job right away.”

Dearth is ranked as the 268th overall player in the country and 40th-best overall player in California. He had a huge junior year which led him to be named the Palomares League Player of the Year. He also plays for the San Gabriel Valley Arsenal during the summer and fall. He previously played for the 15u USA Team.

“John was our first commit in the 2017 class a few years ago so we have had a long relationship with the Dearth family. He is a physical presence with a huge upside. He has continued to develop and has put himself to play a huge role for us right away. We are excited to finally get him on campus.”

O’Sullivan is ranked as the 161st-best overall pitcher in the country by Perfect Game. He threw 61 innings while striking out 64 batters as a junior.  He also plays with fellow signees, Casey Schmitt and Jose Cerda, with the nationally ranked San Diego Show organization.

“Casey is another local kid who we have had a long history with. He comes from a strong baseball family. Casey has really come on strong and made a name for himself. He has a loose arm with a solid three-pitch mix. His strongest attribute might be his competitiveness. That along with his stuff should lead to a lot of innings for him as a freshman.”

Weston is ranked as the 112th-best overall infielder in California. He plays quarterback for his high school football team and also competes in the national cross-fit games. He plays for Trombly Baseball in the summer and fall, competing in national events.

“Spencer is a physical athlete. He has serious power potential and the ability to play multiple infield spots. He’s also the starting quarterback on his high school football team, which shows the type of leader and athlete he is. He is another kid that fits the mold of our team with his strong character.”

Cerda is ranked as the 97th-best overall player in California. He won five games last spring while boasting a 1.42 ERA in 54.1 innings of work. He also struck out 58 batters while earning first team all-league honors. Jose also plays for the San Diego Show, alongside fellow Aztec signees Casey O’Sullivan and Casey Schmitt.

“Jose is an athletic pitcher with a live arm. He throws a heavy fastball with tight spin to his breaking ball. He continues to get better and better. He is another kid that we are happy to keep home in San Diego.”

Weston is ranked as the 130th-best left handed pitcher in the country and the 11th-best in CA. He won nine games as a junior with a 1.53 ERA in 68.2 innings of work. He also struck out 88 batters while only walking eight, which helped him garner all-CIF honors.

“Travis is a polished left handed pitcher with a solid four-pitch mix. He can really spin the breaking ball and commands all of his pitches. He continues to get better and we see him being a very successful pitcher at the collegiate level.”

Winston is ranked as the 159th-best overall pitcher and 15th-best LHP in the state of CA. He threw 34.2 innings as a junior with a 2.22 ERA while striking out 41 batters. He also hit .442 while garnering all- league honors. He competes with nationally ranked Phenom Signature during the summer and fall.

“Christian has everything you look for in a pitcher. He’s 6’6, lanky and loose from the left side. His ball has a ton of movement and he has shown an ability to command three pitches. He has a chance to be very special as he continues to develop.”

Fluman is ranked as the 132nd-best overall pitcher and 12th-best LHP in the state of CA. He won seven games as a junior while throwing 49.2 innings with a 1.27 ERA while striking out 46 batters. He also plays with fellow Aztec signees Daniel Ritcheson and Matt Rudick for nationally-ranked CBA Marucci during the summer and fall.

“Noah has pitched well throughout his high school career. He always competes and has a solid three-pitch mix from the left side. He had a tremendous junior season and has the stuff and makeup to be a very successful pitcher for us. He is another high character kid that will help build the culture of our program.”

“Noah is another local kid that we are excited to keep in San Diego. He is a tremendous athlete and a physical specimen. He has a big arm with tremendous potential. We feel like he will thrive under the tutelage of Coach Peraza.”