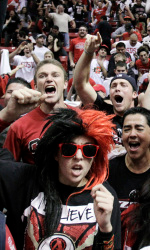 October 23, 2013 (San Diego) -- A limited quantity of San Diego State men's basketball single-game tickets will go on sale on Monday, Oct. 28, at 9 a.m. Tickets can be purchased at GoAztecs.com, by calling 619-283-7378 or by visiting the Aztec Ticket Office at Window E at Qualcomm Stadium.

There are no single-game tickets available for games against Arizona and UNLV, but fewer than 100 remain for the rest of the Aztecs' home slate, including dates against 2013 NCAA tournament teams Boise State, Colorado State and New Mexico. There are also less than 100 tickets left for SDSU contests vs. perennial powers Washington and Utah State.