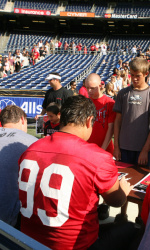 The event features Tailgate Town, a Fan Fest scrimmage and a Meet the Team autograph session.

Gates open at 3:30 p.m. and admission is free. The event begins with Tailgate Town, which includes appearances by SDSU players, coaches and sponsors, as well as the SDSU Marching Aztecs and Cheer team.

It will also feature food trucks, interactive games and a clearance apparel sale.

The Fan Fest scrimmage is scheduled for 5 p.m., leading up to the "Meet the Team" autograph session beginning at 6:30 p.m.

The SDSU football team returns 17 starters from last year's team that finished 9-4 overall, and 7-1 in Mountain West play. The Aztecs claimed the 19th conference championship in school history and advanced to a school-record third-consecutive bowl game.