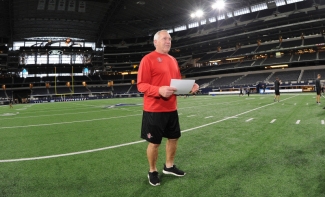 April 11, 2018 (San Diego) - Rocky Long, the all-time winningest coach in Mountain West history and the only three-time MW Coach of the Year, has agreed to a contract extension that will keep him as the San Diego State head football coach through the 2022 season, SDSU Director of Athletics John David Wicker announced Wednesday.

With the extension, Long has five years remaining on his current contract.

Long is coming off his seventh season as head coach of the Aztecs and 10th year overall. Long has helped guide SDSU to a bowl game each of the last eight campaigns, making San Diego State one of only 17 schools nationally and one of just two programs in the Group of 5 to play in a bowl game in the past eight seasons.

Under Long, San Diego State has three consecutive seasons with at least 10 victories for the first time in program history. Additionally, the Aztecs are one of just seven FBS schools to win at least 10 games in each of the last three seasons, joining Alabama, Clemson, Ohio State, Oklahoma, Oklahoma State and Wisconsin. Since Long took over as head coach for SDSU in 2011, San Diego State’s 64 wins are tied for the 16th most in FBS play.

Prior to joining SDSU in 2009 as a defensive coordinator, Long had a school-record 65 victories at New Mexico from 1998-2008, where he led the Lobos to five bowl game appearances over his final seven seasons. To put that accomplishment in perspective, consider that since 1984; UNM is 86-183 (.320) with only five six-plus win seasons in 23 campaigns without Long at the helm.

Before accepting the head coaching position at New Mexico, Long served as defensive coordinator for 12 seasons at three different schools (UCLA from 1996-97, Oregon State from 1991-95 and Wyoming from 1981-85). He also was an assistant coach at TCU, with the CFL's British Columbia team and started his career as a graduate assistant coach in 1972.