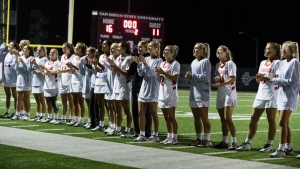 February 3, 2021 (San Diego) - The San Diego State lacrosse team has released their 2021 spring schedule. The Aztecs are scheduled to play in thirteen games, six on the road and seven within the friendly confines of Aztec Lacrosse Field.

Playing in the program’s first game since March 8, 2020, SDSU opens its 2021 campaign with back-to-back home games versus Pac-12 opponents. The Scarlet and Black first welcome the USC Trojans to America’s Finest City on Feb. 13 with a 2 p.m. matchup, and six days later welcome the Oregon Ducks to town for a night game slated to start at 6 p.m. The Aztecs have won their last two contests with the Ducks and hold a 5-3 all-time series record against the Pac-12 foe.

The Aztecs then leave The Mesa and travel to Tempe, Ariz. to take on the Arizona Sun Devils on Feb. 21 at 1 p.m. SDSU won the last matchup with the Sun Devils in exciting fashion, scoring two goals in the last 1:25 to best ASU 19-18.

SDSU then continues a two-game road trip, taking on the California Golden Bears in Berkeley, Calif. Feb. 28 at 11 a.m. The Aztecs topped the Golden Bears 16-11 in the second-to-last game of their shortened 2020 slate due to the coronavirus pandemic.

The Scarlet and Black return home to San Diego to host MPSF opponent UC Davis on March 5, with the matchup between the two programs set to begin at 1 p.m. SDSU last saw the Aggies in the 2019 MPSF Championship game where the Aztecs won their second-consecutive conference title with a 15-7 victory.

The Aztecs head back on the road, traveling to Colorado for two games against familiar opponents. SDSU first battles with the University of Denver on March 12 at 1 p.m. and just two days later travel to Boulder, Colo. to take on the Buffs at 10 a.m.

Heading back to America’s Finest City, the Scarlet and Black host Coastal Carolina March 27 at 1 p.m. The game marks the first meeting between the two young programs, as the Aztecs played their first game in 2012 while the Chanticleers’ program began in 2013.

On April 4, SDSU plays its first repeat opponent of the season, welcoming the California Golden Bears to Aztec Lacrosse Field for a noon matchup.

The Aztecs then drive up the coast to Los Angeles, Calif. to visit the Trojans for their second matchup of the 2021 season on April 9, scheduled for a noon start time. Two days later, SDSU travels to Davis, Calif. to take on the Aggies at 1 p.m.

SDSU rounds out its regular-season schedule with two home games, first hosting MPSF conference foe Fresno State on April 17 at noon. The Scarlet and Black closes out its 2021 slate with a rematch against the Arizona Sun Devils on April 25, slated to begin at 1 p.m.

The MPSF Conference Championship tournament is scheduled to be played April 29-May 1 in Fresno, Calif.