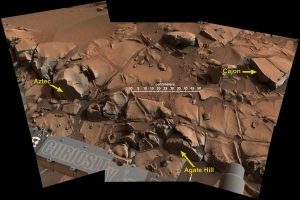 San Diego State Aztec alumni Jordan Evans, an engineer at NASA’s Jet Propulsion Laboratory, says the name wasn’t chosen to honor his alma mater , however. Instead, the latest rock formation found during the Mars Rover Curiosity’s mission was named for a similar sedimentary geologic feature in Death Valley.  So it seemed only fitting to title it the Aztec Sandstone formation.

The formation has proven significant, since analysis found evidence that Mars once had water, SDSU’s news center reports.

All names of features over a specific size found in space must be approved by the International Astronomical Union’s Working Group for Planetary Nomenclature.

This is actually the second sandstone formation on Mars with Aztec in its name  – meaning there is now a pair of out-of-this-world features honoring the Aztecs.