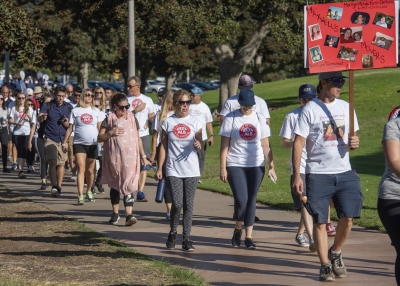 Steve Fisher, retired San Diego State University men’s basketball coach, is scheduled to attend in support of his son Mark who was diagnosed with ALS in 2011. Mark Fisher is now in his sixth season as an SDSU assistant to the head basketball coach, and 17th year overall at San Diego State. He is the son of former Aztec head coach Steve Fisher, who was at the helm of the program for 18 seasons before retiring at the end of the 2016-2017 campaign. “I want to invite the community to join us in the fight against ALS as we come together to raise awareness and much needed funding for this disease,” said Fisher.

Also scheduled to attend will be members of local college and high school basketball teams in support of the Fisher family.

ALS Association officials are expecting about 2,000 attendees. The fundraising goal is $300,000 in donations to benefit research, services and programs for people living with ALS, or amyotrophic lateral sclerosis, often called Lou Gehrig’s disease. All services for patients and families are provided by the Chapter at no charge. ALS officials said the Walk to Defeat ALS draws people of all ages and athletic abilities who come together to honor the courageous souls affected by ALS, to remember those who have passed, to raise awareness and show support for the cause.

Admission to attend Walk to Defeat ALS is free. There is no cost to be a walker, although a minimum amount of $75 raised is requested to qualify for a walk t-shirt. On-site registration is available. The family-friendly event will include music, inflatable bounce houses and free coffee and snacks. Event information is available at http://web.alsa.org/sandiegowalk.

“Those who participate in the Walk to Defeat ALS can be proud to know that they have a direct impact on people living with ALS and their families,” said Steve Becvar, Executive Director, ALS Association Greater San Diego Chapter. “It will be an amazing event again this year. We call this walk as our Chapter’s biggest support group meeting of the year. It’s inspirational to see the engagement and support our attendees have for each other. We will march together toward a treatment and ultimately a cure for ALS. Through education, support groups, access to care and advocacy, we are working to defeat ALS and provide hope to people living with ALS and their families.”

The ALS Association is the only national not-for-profit voluntary health organization dedicated solely to fighting against ALS on every front through research, public policy and care services. The mission of the ALS Association is to find a cure for and improve the lives of people living with ALS. By leading the way in global research, providing assistance for people with ALS through a nationwide network of chapters, coordinating multidisciplinary care through certified clinical care centers, and fostering government partnerships, the ALS Association builds hope and enhances quality of life while aggressively searching for new treatments and a cure.

The Greater San Diego Chapter, chartered in February 2013, is one of 39 chapters nationwide. The San Diego chapter works closely with the ALS San Diego Clinic at the University of California San Diego, which has been certified as a Center of Excellence by the national ALS organization. At its San Diego offices, the local chapter also showcases an ALS bedroom and bathroom that is equipped with features and benefits that would be helpful to people with ALS with their own home setting. For more information about the ALS Association Greater San Diego Chapter, visit www.alsasd.org.