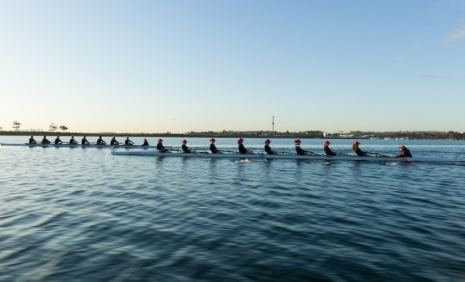 March 11, 2017 (Marina Del Ray, Calif.) - The San Diego State rowing team traveled to Ballona Creek on Saturday where it placed third in all four races against UCLA and Stanford.

In the second varsity eight, Stanford held onto the lead with a 6.42.7 finish, while UCLA raced in 7 minutes even, followed by a 7.11.4 finish by the Aztecs. Though SDSU was in second for most of the first varsity eight, the Aztecs finished third in the final race of the day, logging a 7.51.9 behind Stanford’s 6.27.2 and UCLA’s 6.43.2.

“It was a very useful season opening for us,” head coach Bill Zack said. “The margins behind Stanford and UCLA were reasonable and each crew learned what they need to work on as we get ready for next weekend in Sacramento. We were particularly pleased with the freshmen and walk-ons who did a great job with their first collegiate race. They need to learn to have the ability to stay aggressive through the whole race.”

Following today’s event, the Aztecs will travel to Gold River, Calif., next weekend where they will face Sacramento State on Saturday and Sunday, March 18-19. Both race days are set to begin at 8 a.m.