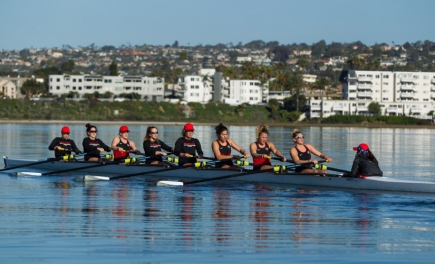 SDSU places first in all but one race

March 18, 2017 (Gold River, Calif.) - The San Diego State rowing team traveled to Lake Natoma on Saturday where it finished first in six of seven races, with wins over American Athletic Conference foe Sacramento State and Saint Mary’s. The Aztecs raced eight boats in seven scheduled events today, first in morning races against the Hornets and versus the Gaels in the afternoon.

“All boats worked hard to get ahead and were able to extend their lead thanks to a strong and consistent middle part of the race,” assistant rowing coach Joeri Bruschinski said. “We will try to put some of the things we learned into Sunday's race against LMU and Drexel University.”

In the final race of the day, SDSU’s varsity four downed Saint Mary’s, finishing in 7:44.5 while the Gaels logged an 8:26.2 finish.

The Aztecs finish up at the Hornet Invitational on Sunday morning with races against Loyola Marymount and Drexel University beginning at 8 a.m.