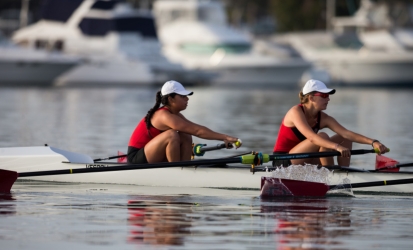 November 13, 2016 (San Diego) - The San Diego State rowing team participated in the San Diego Fall Classic this morning where they saw boats in the top two spots in each race. The regatta was hosted by the San Diego Rowing Club on Mission Bay.

In the novice eight, SDSU’s two boats came in with the first and second-best times, with the ‘A’ boat finishing in 19:26 and the ‘B’ boat shortly behind at 19:38.

SDSU will take a break from the water for the rest of the fall and return in 2017 for their first spring event with the OCC/UCSD/USD scrimmage on Feb. 18.