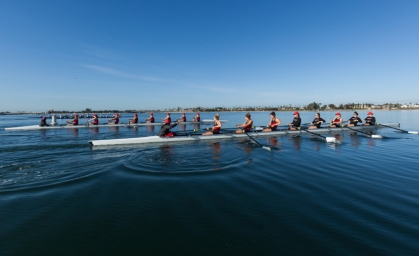 March 19, 2017 (Gold River, Calif.) - The San Diego State rowing team ended its final day at the Hornet Invitational on Sunday where they claimed two victories and a third place finish on Lake Natoma. The Aztecs showed their depth on Sunday, finishing in first place in both the second varsity eight and the varsity four races ahead of Loyola Marymount and Drexel University, but ended the varsity eight in third behind their two opponents.

With a successful weekend behind them, the Aztecs will return to San Diego and work to improve their times before the San Diego Crew Classic, scheduled for April 1-2. The regatta is set to begin at 7:30 a.m. each day on Mission Bay.