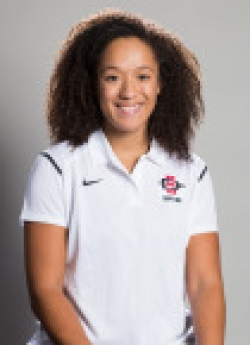 Montgomery is among 37 student-athletes chosen across the nation

March 15, 2017 (San Diego) - San Diego State rower Tara Montgomery has been named a 2017 Arthur Ashe Jr. Sports Scholar team honoree, Diverse: Issues In Higher Education magazine announced. Montgomery was selected as one of the winners for the 37 sports included in this year’s special report and was chosen from over 1,200 nominated minority student-athletes across the nation.

The award recognizes student-athletes who have excelled in academics, in their sport and through involvement on campus and in the community. In order to be eligible for the award, student-athletes must have a cumulative grade-point average of at least 3.2, be an active member of an intercollegiate athletic team throughout the 2016-17 school year and must be active on their campus or in the community.

“The entire team was excited to hear that Tara was selected for this honor,” head rowing coach Bill Zach said. “Anybody who knows Tara knows that she is passionate about her academics, her community service projects and the rowing team. San Diego State and the athletic department have offered the resources that Tara needs to thrive as a student-athlete and she has taken full advantage of her opportunities. It’s great to see.”

The junior has spent her time at San Diego State as a member of the first and second varsity eight crews as a starboard rower. Montgomery was named an American Athletic Conference All-Academic honoree following the 2015-16 season and was a crew member of SDSU’s first-ever varsity eight boat to be named AAC Boat of the Week following a stellar sweep of Sacramento State during the 2015-16 season.

Montgomery is currently majoring in psychology with a minor in counseling and social change, and intends to pursue a Ph.D. in social work or clinical psychology with an emphasis in forensic psychology. Her career aspirations include working in the juvenile system in the area of mental health and aiding the restructuring of the prison system.

Beyond her role as student-athlete on the Mesa, Montgomery has been active in the community and currently interns with the Community Research Foundation where she works with adults with mental illness and those at risk for mental illness. She also serves as a mentor for the Alliance for HOPE International.

Recent Aztec team honorees include Natilee Ruiz (swimming & diving), Nika Sedghi (water polo) and Paul Pitts (football), who was also selected as the 2016 Male Sports Scholar of the Year. A full list of 2017 team winners, in addition to past winners, can be found at www.diverseeducation.com/ashe. The special report will be published in Diverse on April 6, 2017.