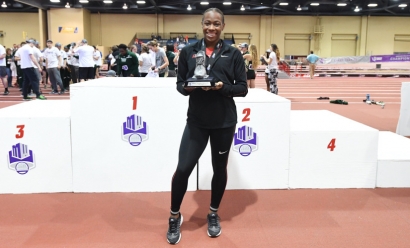 February 25, 2017 (Alberquerque) - Ashley Henderson won a pair of individual events and the San Diego State track and field team captured the 4x400-meter relay title, leading the Aztecs to a third-place finish at the 2017 Mountain West Indoor Track and Field Championships, hosted by New Mexico, on Saturday.

“Ashley had an outstanding championship,” head coach Shelia Burrell said. “I’m especially proud of how composed and focused she was. Indoor is not her favorite by any means, but to run as fast as she did this weekend solidifies her as one of the top sprinters in the country going into the outdoor season.”

Henderson, who just a day prior broke her own school records in the 60- and 200-meter dashes, broke those all-time marks once again with the wins. She ran the 60 in a blistering 7.17, .09 faster than her record set yesterday. She crossed the finish line of the 200 in 22.81, blitzing her previous SDSU best of 23.24. Both times were MW Indoor Track and Field Championship records.

The performance earned Henderson the Women’s Outstanding Performer of the Meet award. This is the second straight year SDSU has captured the honor after senior Micha Auzenne earned the title at last season’s meet.

“Usually I have really bad block starts but today I came out and just focused on running,” Henderson said. “I surprised myself and ended up running really great times. In the 60, my mindset is to just get out and be as aggressive as I can the whole 60 meters. In the 200, I just worry about sprinting 200 meters and I’m done.”

In the 200, Glenn finished second, clocking in at 23.55 for third all-time, while Knight was fifth, and her 23.91 time was the seventh fastest in SDSU history.

Senior Rachel Alesi also made her mark on the San Diego State record book, as her third-place 48-06.00 throw slotted in at fifth all-time.

In the 60-meter hurdles, Knight snagged silver, posting an 8.40 time in the event.

Team Results (out of 11 teams)