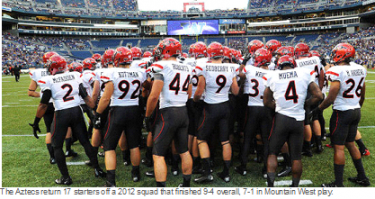 
In addition hosting the two other teams that tied for the conference title in Boise State and Fresno State, the Aztecs also entertain an Oregon State team that finished last year ranked in the top 25.

Leading the list of promotions is the annual KGB SkyShow following the season-opening game against Eastern Illinois on Aug. 31. The largest fireworks show in the area, SkyShow annually attracts a crowd of more than 50,000 fans, including last season when 50,586 watched SDSU defeat Hawai'i, 52-14.

Among the premium giveaways this season is a "We Are Aztecs" t-shirt presented to the first 30,000 fans, courtesy of Associated Students, as part of the "Black Out" theme for the contest against Oregon State on Sept. 21.

Another fan favorite will be on Friday, Oct. 4, when the first 30,000 fans will receive an Aztec black baseball hat, courtesy of Associated Students. That day, SDSU will play host to Nevada on ESPN, marking the first time San Diego State has appeared on the network for a regular season home game since 1999.

A full list of all of the giveaways throughout the season is listed below.

The Aztecs return 17 starters off a 2012 squad that finished 9-4 overall, 7-1 in Mountain West play, claimed the 19th conference championship in school history and advanced to a school-record third consecutive bowl game. SDSU ended the campaign by winning its final seven regular season games.

The Aztecs also play host to Eastern Illinois, Nevada and New Mexico. Fans can purchase tickets through GoAztecs.com, over the phone by calling (619) 283-7378, or by visiting Qualcomm Stadium's Window E between 9 a.m. PT and 5 p.m. PT.

The largest fireworks show in Southern California and the largest student tailgate around are both part of the festivities as San Diego State opens the 2013 campaign. The legendary fireworks show follows the season opening game against Eastern Illinois on Aug. 31.

A Black Out is in full effect as the Aztecs welcome the Beavers to town for the first time in 41 years. The black t-shirt features the official 2013 athletic department slogan, "We Are Aztecs", complete with the spear and the new logo.

Back by popular demand is the Aztec Baseball Hat Giveaway. One of the most popular giveaways from last season, this year's hat features the updated logo on a black hat. Additionally, the game doubles as the GEICO Fleet Week Classic with military events scheduled throughout the day to honor the men and women in the service academies.

Two of the three teams that tied atop the Mountain West standings last season meet in the game to decide the "Battle of the Oil Can." In addition to the homecoming festivities, there will be a pregame carnival in the parking lot at Qualcomm Stadium featuring carnival rides, entertainment and food. The carnival is open to the public and will have something for fans of all ages.

San Diego State welcomes its newest class of Hall of Fame members during the game and prior to the contest area high school and middle school students will have an opportunity to receive information on attending college in the Qualcomm Stadium parking lot. The college fair is open to all in attendance.

Two teams that tied for the conference title in 2012 meet in the Aztecs' final home game of the season. San Diego State will say goodbye to one of its winningest football classes in school history in a showdown with Boise State. Participants can attend a four-hour clinic and learn a routine taught by the SDSU Cheer Squad and Dance Team during the day, and then perform alongside them on the field at halftime of the Aztec Football game vs. Boise State on November 23.