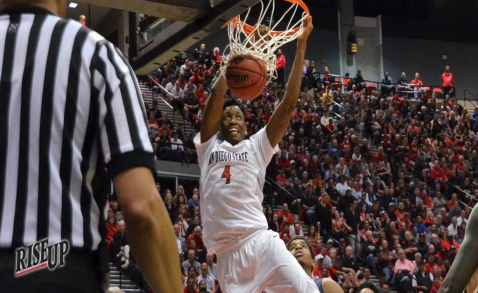 March 21, 2016 (San Diego) - Maybe it helped that the Huskies were without 6 feet, 8 inch forward Noah Dickerson.  Maybe it was heart. Maybe the over-12,000-strong sellout crowd at Viejas Arena made their chants be heard on the court. Maybe it was something else.

Whatever it was, everything you saw in that final March Madness game against Fresno State?  Forget it. Tonight’s Aztec basketball team was revamped.  It was brand new.  It was like Norman Osbourne when he becomes the Green Goblin.  It was different.

The Aztecs came out swinging in the first half of the second round of the National Invitation Tournament, led by some of the best defense anyone has seen all season and, finally, some driving to the hoop and driving fouls instead of settling for three pointers and 15 footers.  Not to mention some high-flying dunks galore throughout the game.

And the Huskies?  Oh, the Aztecs just put them in foul trouble.  No big deal.

In the second half, the Aztecs showed us more of the dominance we asked for, getting out to a 64-47 lead seven minutes into the game.

But the party ground to a halt when the Huskies snuck back and SDSU made a few mistakes, including some foul trouble of their own.  At one point, the Aztec lead was cut to five at 69-64, but they showed resilience and jumped back to an eight point lead with five minutes left in the half.  Thanks to some three-point help from Trey Kell, the Aztecs went back up to a double-digit lead with two and a half minutes left in the game.

The Aztecs would go on to beat the Huskies 93-78.  They advance to the third round of the NIT on Wednesdays against Georgia Tech at 6:00 p.m. at Viejas Arena.