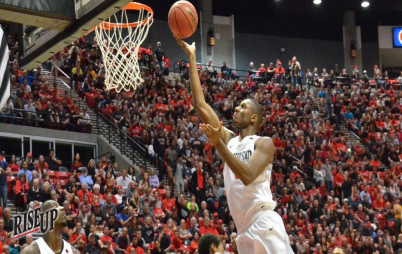 March 23, 2016 (San Diego) - It was another sellout crowd at Viejas Arena as the Aztecs took on the Georgia Tech Yellow Jackets in the National Invitation Tournament quarterfinal.  The winner gets a chance to go to the semifinals in New York City and take on George Washington University.

The defense wasn’t as totally there as in the game against Washington, but we saw the same drives to the hoop and the same offensive aggressiveness.  SDSU went on a 10-2 run with 11:44 left in the first half. Trey Kell had 13 points and hit two three pointers.

It wasn’t always easy; the Aztecs had the Jackets down by 10 at one point, but Tech came back to pull up alongside the Aztecs at 31 all at the half.

It was a close game to start the second half, but the Aztecs blew the game open midway through the half thanks to Winston Shepard’s seven points in the first eight minutes and three drawn fouls.

Trey Kell had three three pointers in the game and the Aztecs won the NIT quarterfinal 72-56 They’re headed to Madison Square Garden to take on George Washington on Tuesday night.