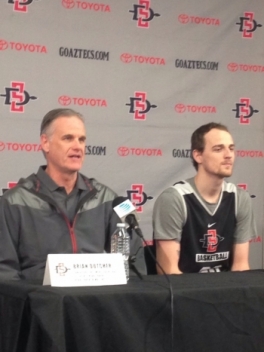 February 14, 2017 (San Diego) - After a win on Sunday at home against Nevada, Aztecs men's basketball heads out on the road tomorrow night to Logan, Utah to face Utah State.  Assistant coach Brian Dutcher and senior forward Matt Shrigley sat down with the media at today's press conference.

"We're finally getting back to full strength." Dutcher said. "Our fans have always been great to us.  They support us like no other.  When you're struggling, there's nothing better than being at home.  It gives you that extra motivation."

"It's more comfortable," Shrigley said. "It's nice and it's definitely helpful, the support and the energy our fans bring."

The Aztecs have taken a positive turn after their 60-57 loss to Air Force on January 24th.  Shrigley was asked if he thought so. "I've never lost to Air Force and that was something that I held onto, that I was proud of.  That loss hurt for me and for everyone.  To be in that game so close and to kind of lose at the end how we did, it just hurt.  So, you know, refocus.  Guys got it going back in the gym and preparing us for the next game."

"This is a good time for us to maybe build a little momentum," Dutcher said.

Aztecs basketball takes on the Aggies tomorrow night at 7:00 p.m.  You can watch the game on CBS Sports Network and listen in on The Mighty 1090. 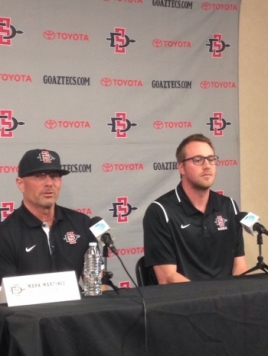 Coach Martinez (right, with Brett Seeburger) gave us the full scoop on 2017 Aztecs baseball. "Coming into this year, we have great leadership with Brett and all the seniors in our program have really done a great job creating that winning culture and we're looking forward to opening weekend on Friday."

Martinez talked about the preparation the players have done leading into the spring. "Get stronger in the weight room.  That was a huge point of emphasis for us this year."

Martinez talked about the difference in his optimism from last year to this year. "I think last year, there were a lot of unknowns.  The difference is that we feel pretty good about where we are position by position with a lot of returners...this year we're pretty set (in our starting pitching rotation).  A lot more questions answered moving into this spring, where last year, I think we had a lot of unknowns.  And so yeah, we feel a little bit better where we are because there's a little more rock-solid roles going into this spring."

On whether pitching will be better than hitting:  "I think we have upgraded our pitching staff definitely.  We have some electric guys on the back end of the bullpen.  CJ Saylor's coming from behind the plate to close games.  Jorge Fernandez is a transfer from San Jacinto that played in the Junior College World Series.  It kind of keeps going.  We're a veteran staff and we definitely feel like we've upgraded."

On the Aztecs being ranked fourth in the preseason polls: "It's just a number."

Seeburger chimed in:  "It's always good to have good pitching.  Pitching and defense wins championships.  I feel comfortable pitching to the sixth inning and letting the ball go to my bullpen.  We have hitting too; the hitting's huge, the hitting's been helping the pitching get better.  We're all feeding off each other right now."

On if the weight room has helped:  "I think I'm in the best shape I've been in in four years, honestly."

On starting Friday:  "It's a great opportunity to do that, get the season started the right way."

The Aztecs open their season this weekend with a Friday night game against Pacific, starting a three-game series with the Tigers.  Seeburger will throw the first pitch at 6:00 p.m.