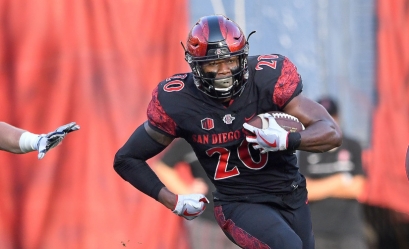 September 2, 2017 (San Diego) - College football is back and the San Diego State Aztecs are the only football team left in San Diego.  This season, they're stepping up to the plate and are ready to #Win22.  Tonight in week 1, they faced UC Davis.

They got off to a good start in the first quarter with junior John Baron II’s field goal.  Senior tailback Rashaad Penny broke the game open with a 61-yard rushing touchdown and the Aztecs led 10-3 after one.

Sophomore tight end Kahale Warring kicked off the second with a touchdown and Penny scored his second rushing touchdown of the game and the Aztecs went to halftime up big, 24-3.

In the third, the freshman wide out Isaiah Richardson showed what he can do with a 21-yard touchdown reception.  Sophomore running back Juwan Washington punched it in after the Aztecs strung together a 99-yard drive downfield to give the Aztecs a 38-3 lead after three.

UC Davis scored twice, but the Aztecs prevailed with a big win in week one to get the season rolling.  Your final score from the Q:  38-17 SDSU.

Next week, the Aztecs go to Arizona to face Arizona State.  Kickoff is at 8:00 p.m. next Saturday.